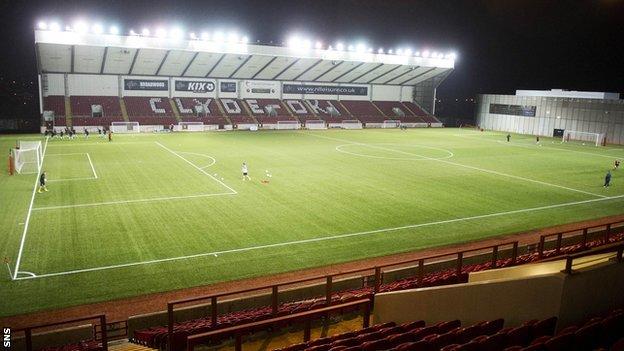 Clyde are this season playing on an artificial surface.

But their website said: "The Broadwood surface remains unplayable following a very cold night in Cumbernauld."

It is disappointing for us to be idle once again

Stirling, who had one of Scotland's first artificial pitches, are now back playing on natural grass and their game against Shire has been called off for a second time.

"The Forthbank surface was solid after temperatures plunged to minus six overnight," said their website.

"No new date has been set, but the game cannot be played next midweek as Shire have a rearranged fixture with Montrose on Wednesday 19 December.

"Weather permitting, our next match will be at home to Berwick Rangers this Saturday."

and that follows the postponement of two ties on Monday and a weekend of disruption.

, including Shire's home game against Montrose.

The latest postponement means the Falkirk club have suffered three consecutive postponements because of the weather and have not played a competitive game since 25 November.

Shire coach John Coughlin told his club website: "It is disappointing for us to be idle once again.

"Thankfully, the weather has not stopped our regular training sessions, so we are at least putting in the time there.

"But we do need to get back playing games and we have to hope the weather changes to let Saturday's game at Clyde go ahead."

The rearranged Second Division match between Alloa Athletic and Queen of the South is due to go ahead.