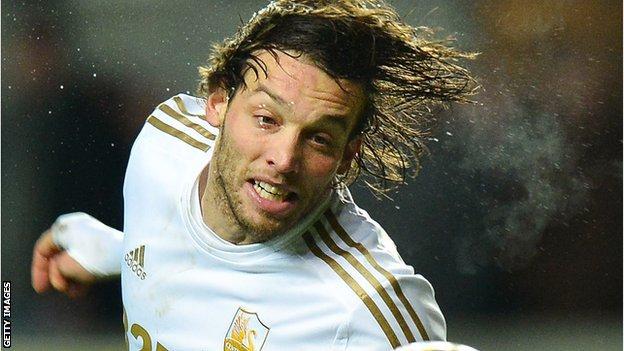 Swansea City's top scorer Michu says he is happy at the Liberty Stadium after being linked with Atletico Madrid.

Michu, a £2m signing from Rayo Vallecano in the summer, is the Premier League's top scorer with 12 goals.

Swans manager Michael Laudrup has said the Spaniard is not for sale, and suggested his value is now up to £30m.

"It is always nice that you get talked about with teams like Atletico Madrid, but now I am very happy in Swansea," Michu told a Spanish radio station.

Michu was reportedly a target for Atletico over the summer before Swansea secured his services on a three-year contract.

The La Liga side are said to be ready to renew their interest as they brace themselves for the loss of top scorer Radamel Falcao, who has been linked with a £45m move to Real Madrid.

Michu scored twice in the 4-3 defeat by Norwich City on Saturday to take his goals tally to 13 in all competitions.

The match at the Liberty Stadium was overshadowed by the arrest of a man for alleged racial abuse towards Norwich City defender Sebastien Bassong. The man was later released on conditional bail.

Questioned about the incident at a media conference in Swansea on Tuesday, Laudrup said he does not believe racism is any worse among British football fans than those in the rest of Europe.

"There are good and bad people in every country," he said.

The former Danish international played all over Europe and since retiring as a player has managed clubs in Russia, Denmark and Spain.

"You can't say we are different here, or we have a major problem here," added Laudrup.

"I mentioned it I think a month ago, it's not a football problem it's a social problem. Don't take this on your [British] shoulders only, I think it's all over [Europe]."

The Swans have been praised by Norwich City for the way they handled the incident involving Bassong, and Laudrup agreed the club had behaved in a professional manager.

"I think the club handled it in a very smooth way," he said.

"I can't comment into any more details now because I think there is still an investigation going on, but I will just say from an overall picture that I think the club handled it very, very professionally."