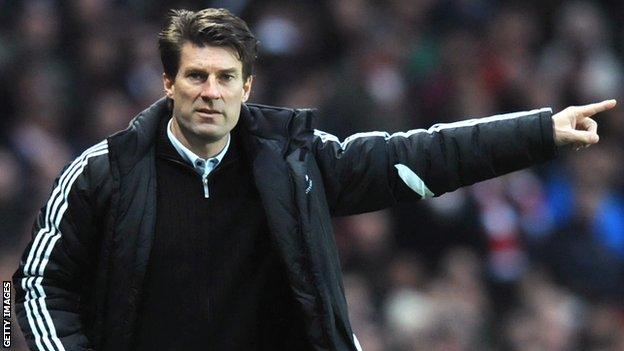 Manager Michael Laudrup views the Capital One Cup as a rare opportunity for Swansea City to win a major trophy.

The Swans host Middlesbrough on Wednesday in the quarter-finals.

"I've always liked cups because when you're in a team that can't compete for the Champions League or title it's a way to success," said Laudrup.

"It's a potential semi-final we're talking about. We're into the dreams of playing a final at Wembley and we have to do everything to get there."

Swansea have never won the League Cup or FA Cup in their 100-year history.

Their last cup success came by winning the Football League Trophy in 2006 with a side that included present midfielder Leon Britton.

Laudrup took Getafe to the final of Spanish football's most prestigious cup competition, the Copa del Rey, in 2008.

During the same season, his side reached the quarter-finals of the Uefa Cup.

"It was a fantastic year, though obviously we had to keep our eyes on the league and you have to manage that, that's the difficult part," said Laudrup, who won the European Cup at Wembley as a Barcelona player in 1992.

"That's something we could have to manage in January, but there is the possibility to maybe go and play in a final and win a trophy.

"When you are a smaller club when do you ever get the chance to play for a trophy?

"Being in mid-table or avoiding relegation is great, but it is a special feeling to win a trophy and we can do it with a cup.

"I have been to Wembley as a player, and been to finals as a manager and it's special."

Swansea, who beat Liverpool at Anfield in the previous round, have never before reached this stage of the competition.

They will face a Middlesbrough side that Laudrup rates as one the favourites to be promoted from the Championship.

And while the Swansea manager is excited by the prospect of reaching Wembley, his opposite number Tony Mowbray considers the tie of far less significance to Saturday's league match at Wolves.

"Whilst it's nice to have a run in a cup competition, get the plaudits and potentially get to a semi-final, televised games and heighten the profile of your club, the bottom line come May is, if you don't finish in the top two or the top six, giving yourselves a chance, it's a wasted season," said Mowbray.

"For the club, the ambition we have got is to try to get back there as quickly as we can."