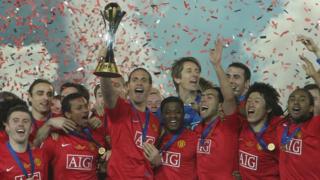 The history of the Club World Cup

BBC Sport takes a look at the history of the Club World Cup, which is taking place in Japan.

The tournament began in 2000, with Manchester United being the sole English winners of the competition - they triumphed in 2008.

Chelsea are making their debut at the Club World Cup, hoping to add the trophy to their FA Cup and Champions League triumphs earlier this year.