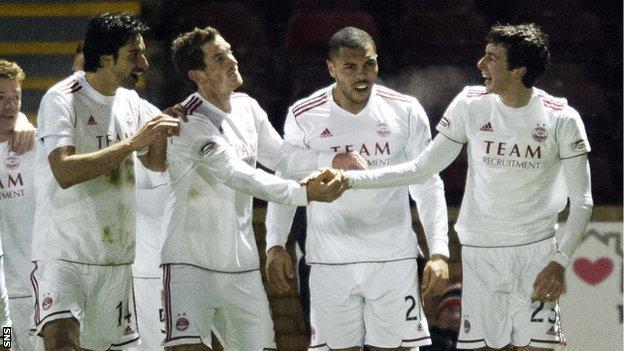 Aberdeen's win over Motherwell in their Scottish Cup fourth-round replay will give the club and its fans a festive boost, insists manager Craig Brown.

Rory Fallon and Joe Shaughnessy scored for the Reds at Fir Park in a 2-1 win.

Brown told BBC Scotland: "It keeps the season going over Christmas because, had we been eliminated from the Cup, it would have been a big anti-climax.

"Although we are still in contention in the league, the cup was a target and we are happy we have achieved it so far."

Motherwell had the upper hand in the first 45 minutes, but a half-time pep talk by Aberdeen's vastly experienced manager seemed to have the desired effect on the Dons players.

"They didn't carry out the plan too effectively in the first half," lamented Brown, whose side are fifth in the Scottish Premier League.

"I thought we were fortunate early in the game, but as the game wore on, we became more dominant and between the first and the second goal we had three or four good chances.

"We were unhappy at half-time. I said to them, 'we are not going to win a Scottish Cup tie playing like that' - very tentative, hesitant and no conviction.

"'We've got to get the ball and be confident in possession'.

"And they were. We used the pace that we've got up front, which is very threatening.

"When [Jonny] Hayes gets it and [Niall] McGinn gets it, they can really put defences under pressure.

"I'm not saying it was the tactics that won the game; it was the players, because they carried out the instructions effectively."

Brown praised the contribution of goalscorer Shaughnessy, and Clark Robertson, describing the pair as "excellent".

"There is a great supply of youth players at Aberdeen and we are benefiting from that," said the manager.

The reward for Aberdeen is a fifth-round match in early February in Leith.

"It's another away game, against Hibernian, which is a difficult one," he continued.

"We are capable of going away from home. We beat Hibs recently at Easter Road.

"It will be extremely difficult, but it gives us a great chance."