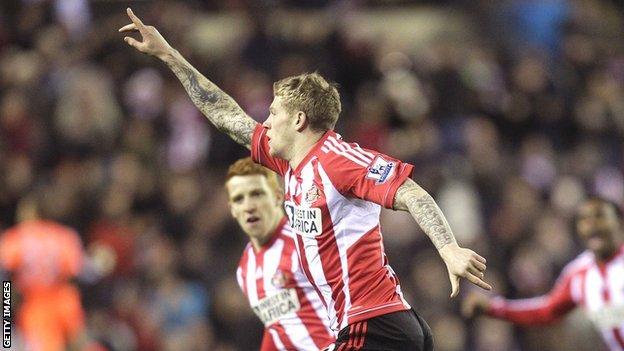 The Black Cats' 3-0 win lifts them up to 15th in the Premier League table but just a point above the bottom three.

"We move up a couple of places which is pleasing, but the points are the main thing," O'Neill said.

"We are far from out of trouble though. It is going to be tight for a long time."

O'Neill added: "Until we have the requisite number of points we are going to be in a scrap with a lot of teams involved."

Sunderland dominated Tuesday's game at the Stadium of Light, recording just their second home league win of the season - and third overall - to move them out of the bottom three.

It is only the Black Cats fifth Premier League victory in 30 matches, earned on the first anniversary of O'Neill's appointment as boss.

"It was a big one for us. We're delighted with the win," O'Neill added. "It was important for us. We've not been able to win at home for some time.

"The performances have actually not been too bad against both Norwich (a 2-1 away defeat) and Chelsea (3-1 loss at home) but that is not what you want to be talking about."

O'Neill's side made the perfect start, with James McClean scoring after just three minutes.

Steven Fletcher, who returned to the side following an ankle injury that forced him to miss the Chelsea game, scored his seventh of the season to make it 2-0, with Stephane Sessegnon adding a late third.

"It was essential we scored early so we were not chasing the game as we have been doing," O'Neill said. "It settles us down and gets the crowd with us.

"We had to do something to raise spirits and that goal was important. The second goal gives us that extra boost.

"Considering he [Fletcher] has not done any training since coming off against Norwich, we are delighted with his contribution and his goal. He has done exceptionally well. It was great he made himself available as he is very important for us."

Sunderland lost defenders Danny Rose and Phil Bardsley to injury and O'Neill said: "Danny [Rose] has been excellent and he is continuing to improve. The crowd have taken to him and that is pleasing.

"He hurt himself during the game and struggled to half-time but he has a bit of a problem. Unfortunately, Phil Bardsley's injury looks a more serious one."

Royals manager Brian McDermott said: "It was a tough night for us. The lads have given us everything. But we have to move on from that and scrap. We have to keep working and stick together as a group.

"This time last year we were 20 points off the leaders in the Championship, so we have that belief that we can come good in the second half of a season and we feel we can do that again."