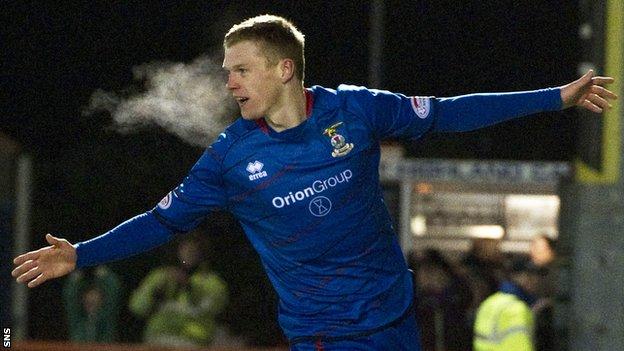 Match-winner Billy McKay thinks he can continue his hot scoring streak because his Inverness team-mates cannot stop setting up chances for him.

McKay's double took Caley Thistle into the fifth round of the Scottish Cup with a 2-1 win over Ross County.

"I just think everyone's playing well and we're creating chances and I'm happy to get on the end of a lot of them at the minute," he said.

"I just hope it continues. With these lads around me, it definitely will."

McKay has found the net 13 times this season - seven in his last five games - for the side who are currently top scorers in the Scottish Premier League.

"Once you get a couple of goals, you go on a little bit of a run and, when the ball falls to you, you shoot when at other times you might have passed it," he told BBC Scotland.

McKay was SPL player of the month for November and scored an excellent goal in the 3-3 draw that forced the replay.

"It was a good strike," he said of his latest goal. "I think the one in the first game was better, but I'm happy today as it's ended up the winner, so I'm delighted at that.

"I'm just confident at the minute and I'm just happy the balls are falling to me and I'm getting shots and they're going in the net.

"Everyone's chipping in. We're the top goalscorers in the league and we're going into every game confident of scoring and we've done it again tonight and we've got the win."

Manager Terry Butcher was full of praise for the 24-year-old who joined Caley Thistle in summer 2011 after leaving Northampton Town.

"He is a great finisher and, when he was at Leicester with Eric Odhiambo, who used to be here, they had a partnership there and banged in loads of goals together," he said.

"He is a creator as well as a goalscorer, but he's on fire at the moment. He looks like he can score every game."

However, Butcher was relieved to win a tie in which he admitted his side did not match the quality of football that has taken them to second spot in the SPL.

"It was a typical local derby cup tie," he said. "There wasn't much football played.

"I think the ball had to be stretchered off at the end. I think the panels were peeling off it, it got battered and bruised.

"But we've come out on top and I'm very thankful for that."