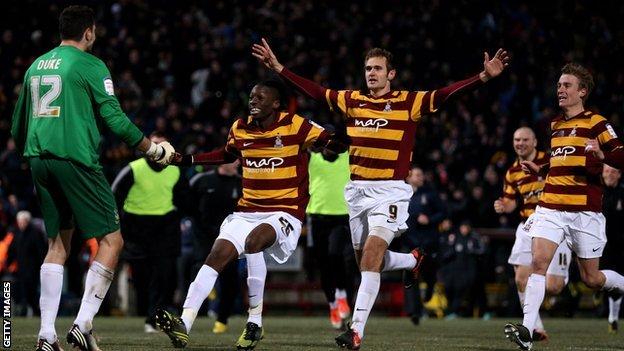 Bradford City director of operations Dave Baldwin believes that progressing to the semi-final of the Capital One Cup has safeguarded the club's financial future.

The Bantams pulled off one of the greatest shocks in League Cup history with a penalty shoot-out win over Arsenal on Tuesday.

"Two televised ties will bring the club in an extra £1m in revenue."

He added to BBC Radio 5 live: "The game last night has made a massive impact on the club's deficit. Half of the overspend has gone in one game. Of course, it's only an estimate at this stage, but it's a massive boost for the financial position of the club."

Stopping the slide? Bradford's league finishes since their last promotion in 1999

Baldwin said the club, who are fourth in League Two, was projected to overspend on wages by £600,000 as they push for promotion to League One.

The Bantams have twice been in administration in the past 10 years and only secured their Football League future in their penultimate home fixture of last season.

Baldwin is hopeful that the cup success will spur Phil Parkinson's men on to achieve a first promotion since Paul Jewell led the club to the Premier League in 1999.

"Our priority is getting out of this division," he continued.

"We have to make sure we achieve that because this is a team and a club on the up. We're on the crest of a wave and we're going to ride it out of this league."

Bradford are the first club from the fourth tier of English football to reach this stage of the League Cup since Wycombe were knocked out by Chelsea in the 2006-07 semi-finals.

They led Arsenal for much of the quarter-final after Garry Thompson volleyed them into a first-half lead, only for Thomas Vermaelen to head in a late equaliser and force extra time.

But the Belgium international then hit the post with the decisive penalty in the shoot-out to send Bradford through.

The win maintained the Bantams' unbeaten record in cup competitions this season, although they are appealing against their expulsion from the FA Cup on Wednesday after fielding an ineligible player in their second-round tie against Brentford.

The draw for the semi-finals takes place straight after the Leeds v Chelsea quarter-final next Wednesday. Along with Bradford, Aston Villa are already in the draw, with Swansea taking on Middlesbrough on Wednesday in the other quarter-final.