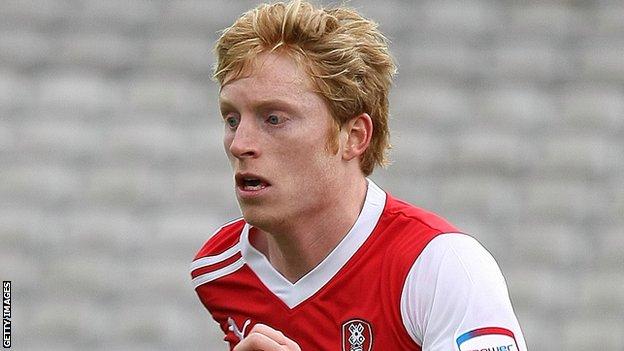 League Two side Rotherham coasted into the FA Cup third round with an impressive away win over League One promotion hopefuls Notts County.

The Millers dominated and led 2-0 after 23 minutes through Ben Pringle's 25-yard shot and Mark Bradley's strike.

Notts' slim chances of a revival were all but ended when Damion Stewart was sent off for elbowing Alex Revell.

Millers manager Steve Evans reached the FA Cup fifth round last season and the season before while in charge of Crawley Town.

Daniel Nardiello added a third when he shot home from 10 yards and Rotherham eased to victory after the interval.

Nardiello's simple finish, after great work by Lee Frecklington, led to a chorus of boos from a sparse and increasingly disgruntled home crowd on the half-time whistle.

And although the hosts improved, their second-round replay exit was sealed in a dismal first-half display.

Notts, who earned a 1-1 draw in first game, were boosted by the return of influential midfielder Alan Judge who played alongside Andre Boucaud. But they made little impression.

Rotherham were sharper, brighter and more tenacious from the outset and fully deserved to be 2-0 ahead.

The hosts did respond for a 15-minute spell after Bradley's close-range effort, but they created no meaningful chances and, after Stewart's moment of madness, they never looked even remotely capable of pulling off a remarkable comeback.

Rotherham's small but noisy away following watched their side sit back and soak up pressure, safe in the knowledge their path into the third round and an away tie against Aldershot was pretty much assured.

The Millers did have several decent openings to add to their tally on the break - notably through Nardiello - but their work was already done and they were able to cruise through the second period.

"But what I can't afford to do is take that into the changing room with me.

"So the message that I went into the changing room with is that we're six points off the top of League One."

"I think from start to finish it was an absolutely fantastic performance.

"I've said that if you don't show effort, passion and commitment then you don't get the chance to let your ability decide the game.

"I thought about making one or two changes because some of the players were looking tired but this is the FA Cup."