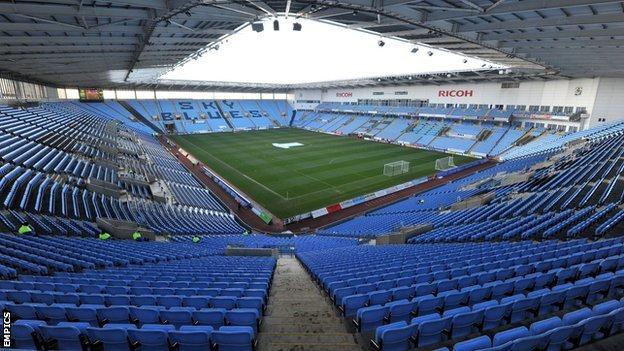 Coventry City are back in negotiations with their Ricoh Arena landlords in an attempt to bring an amicable conclusion to their long-running rent row.

Arena Coventry Limited (ACL) claim that the Sky Blues owe £1.1m in rent arrears and have given them until Boxing Day to pay up - or face a winding-up petition.

But the League One club, who claim the rent is too high, are still keen to negotiate a new agreement.

"The club can confirm that we're now in talks with ACL," said a club statement.

"However, whilst these talks are ongoing it wouldn't be right for us to make any further statements or to comment on any aspect of the situation.

"Since we received ACL's initial letter we have been asking for them to get round the table and negotiate with us.

"We want to conduct our negotiations in a professional manner, in confidence and not via the media. It is clear that this is what the fans want us all to do."

The heart of Coventry's dispute over their rent is that, at £1.28m a year, they believe it to be the highest outside the Premier League and that it should be renegotiated.

Coventry claim that, on average, other clubs pay less than £170,000 a year and, unlike the Sky Blues, make revenue from matchday parking, as well as food and drink sales.

The club were taken to the High Court in August in Birmingham after they stopped payments of £100,000 a month in rent to ACL in April - but they were told to top up a deposit fund to cover ACL's unpaid invoices.

Coventry even considered moving away from the city to find a new home as one way of resolving the long-running row.

One report even suggested that the Sky Blues, who averaged 15,000 gates in the Championship last season and are still bringing in an average of around 10,500 in League One, might consider a 90-mile round trip for home games at the 6,500-capacity Nene Park, home of the now disbanded Rushden & Diamonds and latterly Kettering Town.

But the club are now hopeful that further discussions with ACL will trigger a more favourable outcome.