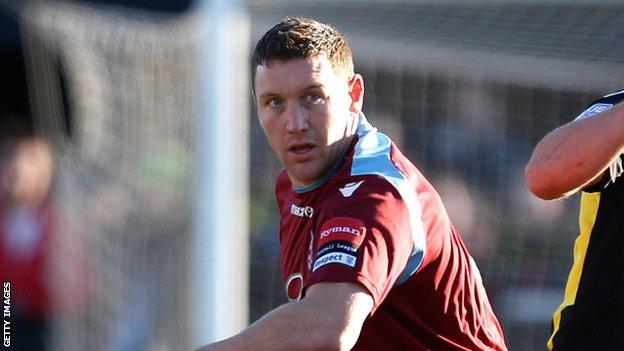 Hastings United's player-boss Sean Ray hopes his side can reach the third round of the FA Cup for the first time.

The Isthmian Premier League side host Harrogate in a second round replay on Thursday knowing a win would earn them a trip to Middlesbrough.

"How many times in your football career do you get the chance to do this?" Ray told BBC South East Today.

"It is great for our side and brilliant for our players to get to do this in front of their own fans."

Before this season the East Sussex side had not won an FA Cup tie since 2006 but Ray has guided them from the first qualifying round to the brink of the third round proper.

Despite the replay being shown live on TV, the club expect a crowd of around 4,000 at the Pilot Field to see them play the Blue Square Bet North side, who are one tier above Hastings in the non-league pyramid.

"It still hasn't quite sunk in for everyone yet," Ray continued.

"It's a bit surreal but we are all looking forward to it.

"I don't think we'll ever experience it again. The ground is completely sold out and everywhere we go we are getting handshakes and good luck messages.

"Not just from local people but from teams and managers all over the place.

"It won't sink in until the run comes to an end and we are out of the FA Cup. We will look back and realise it is a great achievement."

Arrows chairman Dave Walters hopes the club can use the money to improve the club both on and off the field.

"We've got a few little plans and things we have got in mind," Walters told the BBC.

"One thing I won't do is let the money burn a hole in the pocket. But we won't be going mad either.

"We've got to use this to build a platform to try and move up at least one league if we possibly can.

"It will be tremendously difficult but we've got half a chance now.

"It's our little time in the limelight. We know it could all come to a crashing end on Thursday.

"We desperately hope it's not the case but if it does it has been wonderful for everybody involved at the club."