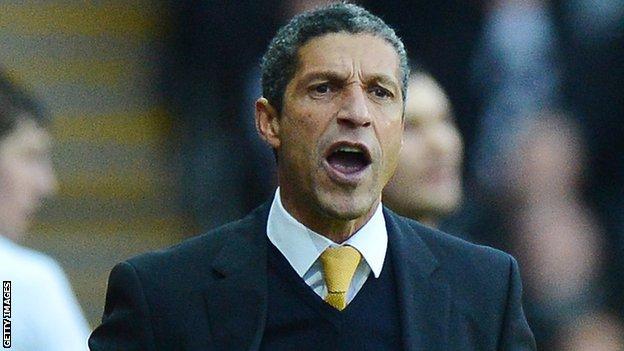 Norwich City boss Chris Hughton says the disappointment of Tuesday's Capital One Cup exit should not detract from his side's recent progress.

The Canaries suffered their first defeat in 11 games, losing their home

"It's a down changing room at the moment but we must not take away from what they've achieved over the last couple of months," said Hughton.

Norwich in the League Cup

"It's my responsibility to make sure we get them back on track."

Norwich missed out on a chance to reach their first League Cup semi-final since 1985, the year in which they went on to win the competition for the second time.

Three late Villa goals put the game out of reach for Hughton's side, who have now conceded seven in their last two games after letting in just five in their previous nine.

"Yes, it is a concern because we've conceded poor goals - that's always a concern

"But I'm more concerned that there was an opportunity to make progress in this cup and we haven't done," the Norwich manager told BBC Radio Norfolk.

"We need to make sure we are back to where we've been, back to basics, for what is a big game against Wigan on Saturday.

"We need to make sure we get rest and recovery over the next few days and come out fighting against a good Wigan side."

Midfielder Wes Hoolahan missed the Villa game because of a groin injury and will be assessed ahead of the Latics clash, along with Alex Tettey, who has sat out the last two games.