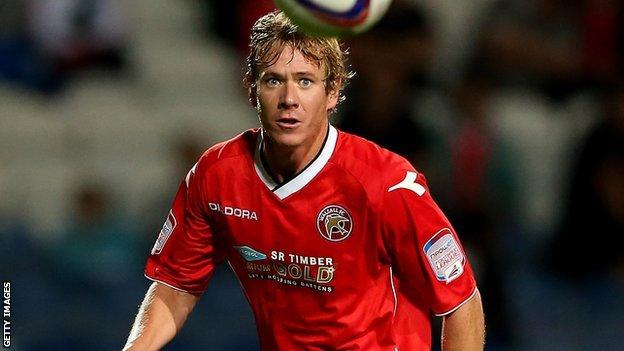 Experienced Walsall defender Dean Holden insists that the out-of-form Saddlers have the mental strength to turn round their faltering season.

Saturday's 5-1 defeat at Midlands neighbours Coventry City stretched the Saddlers' run to 15 games without a win - which has taken them from sixth in League One to 19th.

"We have to keep the belief and come out fighting," Holden told BBC WM.

"We're in a dog fight but there's no point feeling sorry for yourself."

He added: "There are plenty of teams in all the leagues down near the bottom.

"The ones that end up being relegated are the ones feeling sorry for themselves and always blaming someone else.

"That's not what we're going to do.

You've got to pick yourself up as quick as you can, get your boots on, put a smile on your face and work as hard as you can. That's the only way to come out of it

"You've got to pick yourself up as quick as you can, get your boots on, put a smile on your face and go and work as hard as you can. That's the only way to come out of it."

Walsall's slide down the table has been all the more hard to explain, given that their overall form in the early part of their winless run was still very good - and they were simply having no luck in front of goal.

The 1-0 defeat at Holden's old club Shrewsbury was a classic case in point, when the Saddlers were beaten only by an inspired display from home keeper Chris Weale.

But the confidence of Dean Smith's mostly youthful side has visibly ebbed in recent weeks - especially in the eight games since losing chief play maker Florent Cuvelier with a hamstring injury.

Now, having slid to within three points of danger, Walsall have the potential springboard of two successive home games against two sides in the lower half of the League One table - Yeovil (15 December) and Colchester (22 December).

Admittedly, Walsall are not helped this Saturday by being without skipper Andy Butler, banned for one game following his red card late on at the Ricoh Arena for a second bookable offence.

"It was a bad day at the office," admitted Holden. "But there are worse things going on in the world.

"And we've got to put things right as soon as we can.

"We actually looked good on Saturday for the first 20 minutes. Maybe it's not reacting when we do let in a goal.

"The belief has to be there."