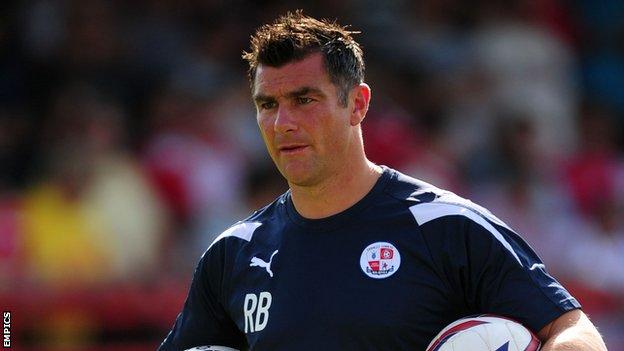 Crawley Town manager Richie Barker says it will take time for him to make his mark on the side.

The Reds are 10th in League One after a run of seven games without a win.

He told BBC Sussex: "This club has had a turnover of three managers in six months so a turnover of players was always going to be difficult as well.

"I've signed two permanent players so far and there are still players with us who are not making a great deal of difference to what we want to do."

He added: "I like a challenge and at the minute I am dealing with other people's players.

We are right at the top of what the Football League allow us to spend. Until we free up some money I won't be able to bring people in

"Some of it works, some of it doesn't.

"Until I get a chance to do it with my own players, it could take a while."

Barker joined the West Sussex side on a two-year deal in August after Sean O'Driscoll left Crawley to join Nottingham Forest after just two months in charge.

The departure of Steve Evans to Rotherham in April had prompted Craig Brewster to take the reins and guide Crawley to a second successive promotion in May.

Midfielder Mike Jones and defender Joe Walsh are the two players Barker has brought to the club since his appointment as manager but he says his desire to make more additions have been hampered by the club's finances.

"It will not be in this January window," Barker continued.

"We are right at the top of what the Football League allow us to spend [on wages]. Until we free up some money I won't be able to bring people in.

"We need to restructure a few things right from the bottom and try to get this club closer to the point where, financially, it is almost [taking care] of itself.

"If we can do that by recruiting the right players and hopefully keep producing players and moving them on, we could keep the club going in the right way.

"It will take us a while to get back on track to where we want to get to.

"But once that is done hopefully a bit of stability will mean we can maintain top half of League One status."