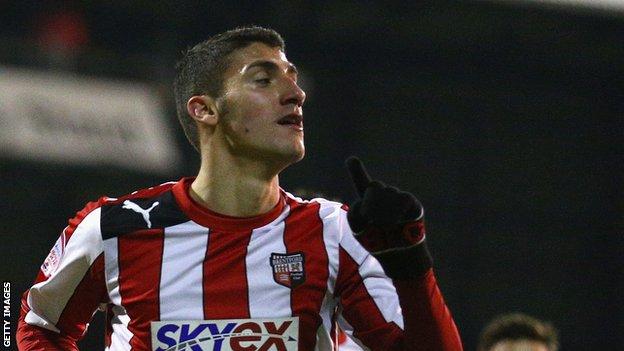 Brentford became the first side to beat Bradford in a cup game this season in their FA Cup second-round replay.

The Bantams, who were expelled then reinstated in the competition, were ahead when Kyel Reid smashed home, but Marcello Trotta's penalty levelled.

After no more goals in 90 minutes, Alan Connell put the visitors ahead from the spot in extra-time.

After the original tie finished 1-1, Bradford were expelled from the competition for fielding an ineligible player in Curtis Good, before a successful appeal allowed them back into the Cup.

However, the Yorkshire side were on the back foot early on in the replay with both Stewart Dallas and Trotta forcing Bantams keeper Jon McLaughlin into fine saves, before Reid's opener put the visitors ahead against the run of play.

After Trotta levelled from the spot when he was fouled by Carl McHugh just before half-time, neither side could find a winner in the 90 minutes.

Early in the extra period, Shaleum Logan's foul on Blair Turgott allowed Connell to fire Bradford ahead from the spot against his former side.

But Trotta's strike, Donaldson's turn and shot and Forrester's low drive ensured that Brentford ended Bradford's unbeaten run in cup competitions this season, and set up a third-round trip to Southend.

"I thought it was a gallant performance from the lads, given the team we had out tonight, I don't think we could have asked for much more.

"We didn't want to go to extra-time but there are a lot of benefits from the game.

"Kyel Reid has been out for 10 or 11 weeks, that's like an off-season and he needs a lot of work but it was great for him to get a goal and that will give him a lot of confidence.

"We decided with the board that we would leave some of our key players back in Bradford for the game because some of them really needed a rest."