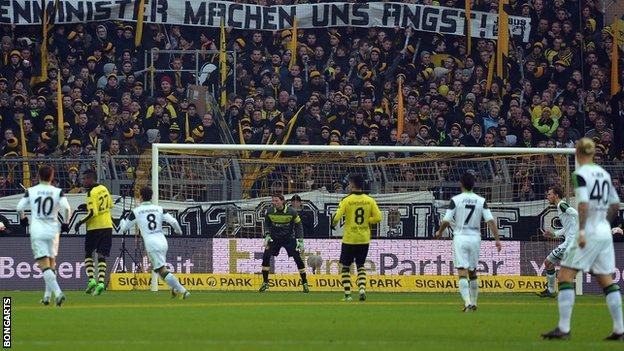 German clubs have agreed a number of security measures after concern over a rise in violence connected to football.

The top two divisions' 36 clubs voted in favour of tougher stadium checks and a crackdown on flares and smoke bombs.

Other measures include tougher action on offenders, extra surveillance and more training for security staff.

Clubs had come under pressure from politicians to act after criminal action against fans reached its highest level in 12 years.

Despite the troubles, German's top division has the world's highest average attendance at around 43,000.

Twice as many fans were injured last season as the year before.

However, the proposed sanctions had prompted protests from fans, and there was a demonstration by 500 supporters outside the hotel in Frankfurt where the vote was taken.

But Reinhard Rauball, president of the German League Association, said: "Professional football is coming out as a winner today.

"All 16 points were accepted with a wide majority. Germany's football culture is not threatened by this."