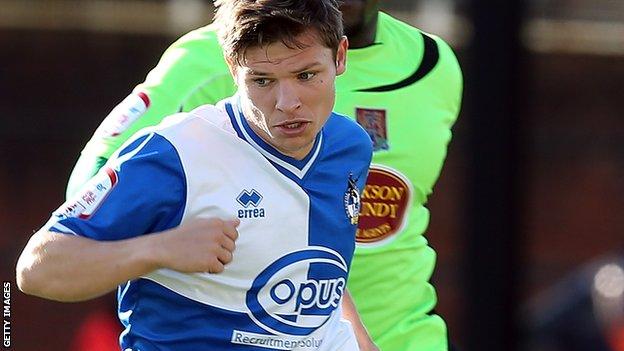 Midfielder Wayne Brown has decided to leave Bristol Rovers when his contract expires in January and is set to move to Finland.

The 24-year-old initially joined the Pirates on loan from Fulham in February 2010 before signing a permanent deal that summer.

He has made 64 first-team appearances for the League Two club.

"We made Wayne an offer but he didn't feel it was enough," manager Mark McGhee told BBC Radio Bristol.

"He'll be leaving the club in the New Year and it's probably the right thing for him.

"In situations like this there's a natural cull; people who are out of contract you have to let go because we've not got an infinite budget.

"Wayne's been a great professional. He trains well every day and gives you 100% every time he plays and we certainly wish him well."

Meanwhile, McGhee is in talks with Bolton about extending the loan spell of striker Tom Eaves, who is due to leave Rovers to return to the Championship club at the end of December.

Eaves, 20, has scored six goals in 15 appearances since joining Rovers in September.

"Tom is going back to Bolton next week to meet manager Dougie Freedman properly. He'll train for a couple of days and I'll then talk to Dougie and Tom about what happens after the New Year.

McGhee is also set to enter contract talks with forward Derek Riordan, whose short-term deal runs out at Christmas.

But the Rovers boss says fellow Scotsman Riordan, who has failed to score in 12 appearances, is going to have to impress in order to stay at the Memorial Stadium.

"Derek not only has to do a bit more but he has to convince me about his desire to be here," said McGhee.

"It's been difficult for him - his wife had a baby and had all his legal stuff going on. We have to know how he feels about all of that before we can offer him anything."