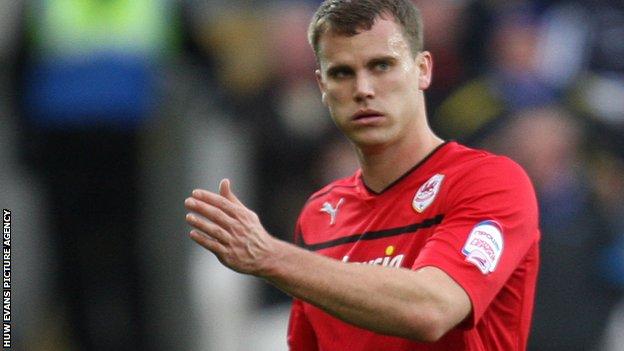 Cardiff City defender Ben Turner has signed a two-year contract extension until the summer of 2016.

Turner, 24, has been a regular in the Cardiff side since joining on transfer deadline day in August 2011 from Coventry City for an undisclosed fee.

"This is the club I want to play for. The attitude at this club is spot on," he said.

The former England Under-19 international rejected an offer to play for Wales in August.

He qualifies for Wales through his Welsh grandmother but said he could not "pretend" to be a Welshman.

A foot injury kept Turner on the sidelines for over a month at the beginning of the season but he has since returned to the side, helping Cardiff to top spot in the Championship.

"Ben was someone I was desperate to sign from the moment I came to this club," said Bluebirds manager Malky Mackay.

"I was delighted when that happened and then even more so based on the fantastic season he had for us last season.

"He told me he was desperate to commit to Cardiff City for the longer term and that was music to my ears."