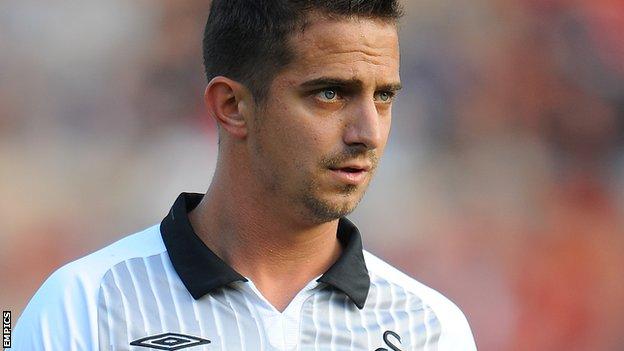 Wigan manager Roberto Martinez has confirmed that Dutch midfielder Ferrie Bodde has been offered the chance to train with the Latics.

The 30-year-old, who played under Martinez at Swansea, has been plagued with knee injuries for three years.

"It is just having him training, for him to see how he feels and how the knee reacts," said Martinez.

"It is just to see how he gets back into shape, nothing else.

"I'm sure he wants to work in a group. He has been working with [Dutch club] ADO Den Haag for a few months and I think it will be great just to see where he is and how his situation is after a long spell with injuries."

Martinez signed Bodde whilst at Swansea in 2007 and the midfielder played a big role in their promotion from League One.

But injury problems have prevented him from featuring regularly in the Championship or playing in the English top flight - something Martinez hopes will happen in the future.

The Wigan boss continued: "I always said he was the best player in his generation and it has been a real shame that out of the players that started something special at Swansea, he is the only one who has not played in the Premier League.

"That is a real shame and I hope that one day he can get that reward, but that is a long way off."