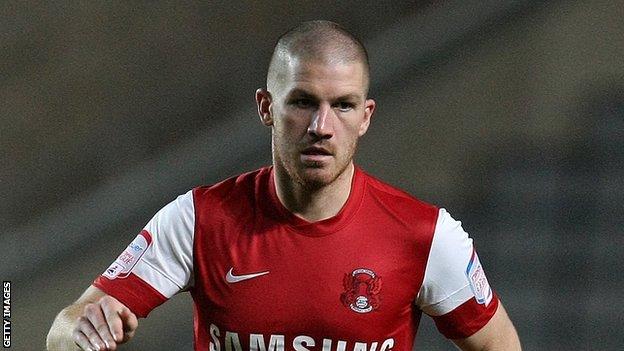 Leyton Orient captain Ben Chorley says their current winning streak is down to confidence in their ability.

The O's have won their last eight games in all competitions, which is the club's longest winning streak since the 1955-56 season.

He told BBC London 94.9: "When you are on a run like we are on, it almost clicks into gear on the pitch.

"You have a confidence about you that, no matter what, you are not going to concede and liable to nick a goal."

The 30-year-old defender added: "I think confidence is a massive part of it.

"We are doing well and we have players that are cracking on when they play. It is running through the club at the moment."

Orient's current run is all the more remarkable given they have lost four games in a row twice this season.

"We've just got our act together compared to the start of the season," Chorley continued.

"When you are going through an up-and-down run like we were, you expect to go places and be under the cosh.

"We have had the same 13 or 14 players over the last eight or nine weeks.

"Even when the manager [Russell Slade] has changed it the team have carried on doing well.

Russell Slade's and Kevin Nugent's favourite saying is 'stay in the game'. Earning clean sheets has been our target. We'll see where it takes us

"It seems to have clicked in and long may it continue. It's been a tremendous run so far."

The last time Orient won nine games in a row was in 1955-56, the same season that the club-record of 10 league wins in a row was set.

"The record is not really something we have spoken about," he said.

"We know about it but there's been no particular talk of 'we've got to break it'.

"The manager's and the assistant's [Kevin Nugent] favourite saying is 'stay in the game' and we'll see where it takes us.

"Seven of our last nine games have been away so earning clean sheets has been our target."

Five of Leyton Orient's wins have come in League One, which has lifted them up to 11th in the table, six points off the play-off places.

Chorley believes Orient have the potential to get a play-off spot which eluded them in 2010-11, when they finished in seventh.

"Over the last two or three years with Charlton, Leeds or Sheffield Wednesday, you can almost back two or three teams to be at the top of the table," he said.

"This year you'd predict Sheffield United and MK Dons but I think there are four or five places up for grabs.

"It is anyone's. The league is that tight. Hopefully we can go one better than a couple of years ago and make the play-offs."