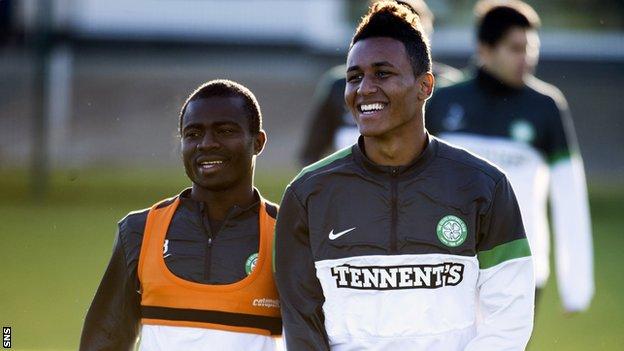 Like Agudelo, Acheampong, of Thailand club Buriram United, had arrived in Glasgow hoping to impress on trial.

Celtic manager Neil Lennon said of 20-year-old Agudelo, presently with Chivas USA: "Juan is someone we like and we've made tentative approaches.

"Whether we can do something, we don't know, but Frank we'll not be pursuing."

Juan was a player who impressed us while he was here

Agudelo, who has 16 caps for the USA, started his career with New York Red Bulls before switching to Major League Soccer rivals Chivas at the start of the season.

Celtic took the opportunity presented by the end of the MLS season to take Agudelo on trial from the Los Angeles club.

Lennon said last month that he hoped to hold signing talks with Agudelo, but he has not had time to pursue the matter with chief scout John Park and chief executive Peter Lawwell.

"When he left, he's having a bit of a break because the American season finished," said the Celtic manager.

"But we would look to pursue him again. So I don't know where we are in terms of enquiries.

"I have had that much on myself that I haven't had the chance to speak to John or Peter on it.

"He was a player who impressed us while he was here."