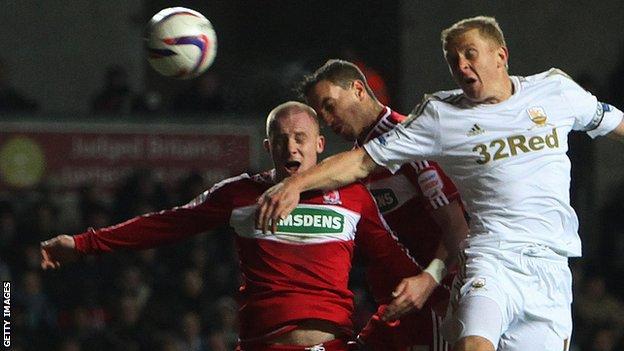 Monk, 33, joined the club in 2004, a year after victory on the final day of the season saved them from relegation to the Football Conference.

Now Swansea are sitting comfortably in the Premier League and have reached the semi-final of the League Cup.

"If you would have told me this eight or nine years ago I would have laughed at you," said defender Monk.

"It's been brilliant, it's been such a good journey. But whatever anyone says, we deserve it."

Swansea's rise through the leagues mirrors their previous golden age when John Toshack guided them from the old Fourth Division to the top of the First Division in the space of four years.

An equally rapid fall followed and the club were on the brink of extinction in 2001 before a consortium of local businessmen and supporters came to the rescue.

After avoiding a potentially fatal relegation from the Football League in 2003, Swansea have flourished ever since, and Monk has been an integral part of it all.

"We've worked hard and it's not as if we've got lucky," he told BBC Wales Sport.

"Every single person that's played for the club, everyone involved - the chairman, the fans - everyone has worked for it.

"We thoroughly deserve to be where we are."

A tight 1-0 victory over Middlesbrough on Wednesday took Swansea into the League Cup semi-finals for the first time in their 100-year history.

Monk was involved in the winning goal when his aerial presence forced Boro defender Seb Hines to head into his own net.

The semi-final line up with be completed on 19 December when Championship side Leeds United host European champions Chelsea.

Manager Michael Laudrup says he has "no preference" over who they face in the last four, and Monk believes their league results this season - including wins at Arsenal and Newcastle United - shows their pedigree.

"I'd fancy our chances against anyone over two legs, especially if we're on our game," added Monk.

"We've proved this season we can compete with the very best."

The Swans face Tottenham Hotspur in the Premier League at White Hart Lane on Sunday (13:30 GMT).