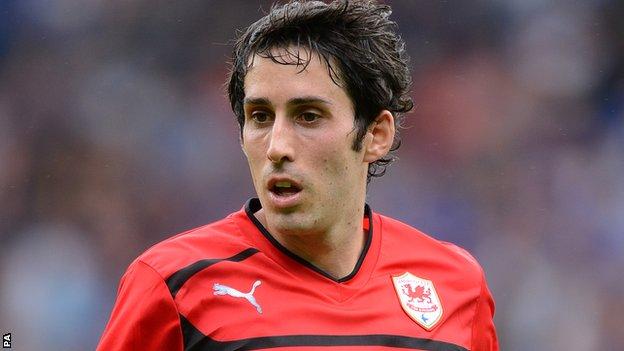 Cardiff midfielder Peter Whittingham says it would be a bad sign if there were no bids for him in January.

But the 28-year-old says his only aim is to ensure Cardiff are promoted.

"It is flattering. You know you're doing your job right if you're going to get a bit of interest," he said.

"It's just great to be linked with such clubs and things like that, but my dream as soon as I got here was to get Cardiff to the Premier League and that's what I want to do."

The left-footer in August, 2012 and says he has made the right choice, with Cardiff sitting proudly at the top of the Championship table.

"I think the boys are relishing it, I think they enjoy the whole expectancy, especially with the home games," said Whittingham, who was speaking at a pre-Christmas visit by Cardiff City players to the Ty Hafan children's hospice in Cardiff.

"We enjoy it and we deserve to be there [top of the Championship]."

Whittingham has played more than 250 games for Cardiff since joining in 2007 from Aston Villa in a ÂŁ350,000 deal, scoring more than 60 goals.

But despite playing his trade out of the top flight, the playmaker believes his time at Cardiff has improved him.

"I think I'm a better all-round player now and I probably relish the physical battle as much as the whole on-the-ball-thing now, which is only going to be good for me," Whittingham added.

"I've had to develop; you come down from the Premier League and it's always going to be hard because the games come thick and fast here.

"I feel as though it took me a little while to adapt, which I think it does with quite a number of Premier League players coming down here.

"But I feel as though I've done that and I'm reaping the rewards now."