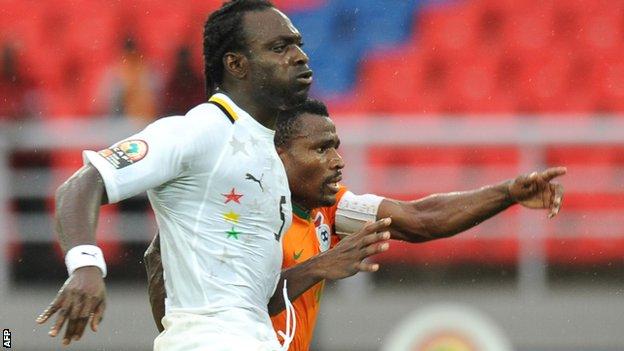 Mensah (pictured above) is currently without a club after being released by the French side Lyon during the close-season.

There is no place for Michael Essien, who asked to be left out in order to focus on his club career at Real Madrid.

The squad features 11 players from the group knocked out at the semi-final stage by eventual champions Zambia earlier this year.

Coach Kwesi Appiah will trim the squad to 23 after a training camp in the United Arab Emirates, where Ghana will play friendlies against Tunisia and Egypt.

Ghana will be seeking to win a fifth Africa Cup of Nations title, when the tournament gets underway in South Africa from 19 January.

The Black Stars, though, have not won the continent's top prize since 1982, when they beat Libya 7-6 on penalties in the final.