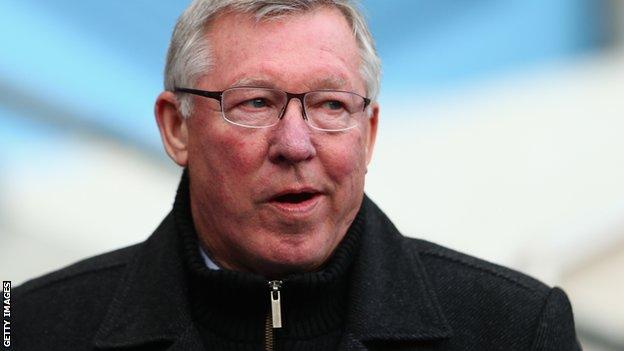 Manchester United boss Sir Alex Ferguson says nets are not required at grounds to protect players, despite the object thrown at Rio Ferdinand which left him with a cut.

Ferguson wants more vigilant stewarding within grounds to stop incidents like the one in the Manchester derby.

Ferdinand was struck close to his eye as he celebrated Robin van Persie's winner last Sunday.

Ferguson said: "It's not a consistent thing. Stewarding is a better policy."

"What happened last week was scandalous - it could have taken out Rio Ferdinand's eye," said Rodgers.

"You get one or two mindless people at games and the focus has to be on them.

"How can we punish them so they never get the chance to do it again, not punish the other 40, 50, 60 thousand people. They are there for the passion and love of the sport."

Professional Footballers' Association chief executive Gordon Taylor expressed his concern at last week's incident during United's 3-2 win at Etihad Stadium and said the introduction of nets, which are used in other parts of the world, are the only solution.

But Ferguson does not believe that such a move is the right answer.

"We've seen netting behind goals in some grounds but I'm not so sure," he added.

Manchester City's Vincent Kompany also rejected calls for the introduction of netting to protect players, saying fans should not be treated "like animals".

"I hope actions will be taken but let's not forget where football has come from and how far it has come", Kompany said.

Nine people have been charged following the match and United striker Wayne Rooney was also the target of objects thrown from the crowd.

Belgium international defender Kompany, 26, who is a doubt for Saturday's trip to Newcastle due to a groin problem, condemned the incidents.

"It is never a good thing to happen, not just for Manchester City or Manchester United, but for football," added Kompany, speaking to Football Focus during City's annual visit to Royal Manchester Children's Hospital.

"I would definitely say we need action on prevention but keep treating fans as human beings and not animals that have to be behind cages.

"I do think we should take action against these incidents and I have heard a lot of suggestions about putting up nets and everything.

"But the fact we are able to put people outside of cages is something that makes the English game so much more special."

City keeper Joe Hart also had to stop a fan who had run on to the pitch from reaching Ferdinand as the defender recovered from the blow.

In October, Sheffield Wednesday goalkeeper Chris Kirkland was attacked by a fan who ran onto the pitch during his side's match against Leeds United at Hillsborough.

Kirkland, 31, required treatment after he was struck in the face during the Yorkshire derby, which ended in a 1-1 draw.

Taylor such as behind the goals and around the corner flags.

However the chairman of the Football Supporters' Federation, Malcolm Clarke, warned against "knee jerk" reactions. He said safety was improving at games and pointed to government figures showing arrests were down 24% on previous seasons.

609 comments
Back to top
unknown