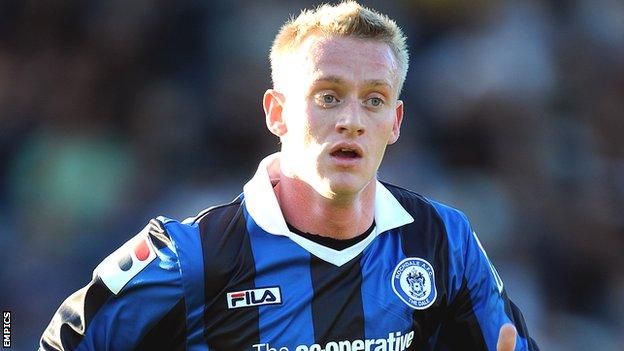 Rochdale moved to within a point of the League Two play-offs with victory over third-placed Cheltenham.

Bobby Grant curled in a fine effort from the edge of the area to set the Dale on their way and Grimes doubled the lead from 25 yards.

Phil Edwards turned into his own net to give the away side hope, but it turned out to be short-lived when Grimes fired in another fine strike.

Dele Adebola tapped in to round off the hosts' first win in five matches.

"Shocking, absolutely shocking. We started alright for five minutes and then got exactly what we deserved in the end. We had warning after warning, I thought we'd rode it out but we were not good enough by a million miles.

"It could have been a lot more. It was unacceptable. I'm happy to get away with four; it could have been 15. It was soft. I'm not having that, that's really upset me. We were a disgrace from start to finish.

"Scott Brown was outstanding, absolutely outstanding, the rest have got to look at themselves in the mirror - it was a joke. Browny's earned a day off, the rest - Christmas is cancelled.

"Pathetic, absolutely pathetic. I'm fuming. The ball wasn't sticking up the top, we were giving the ball away in midfield and we defended like pansies."