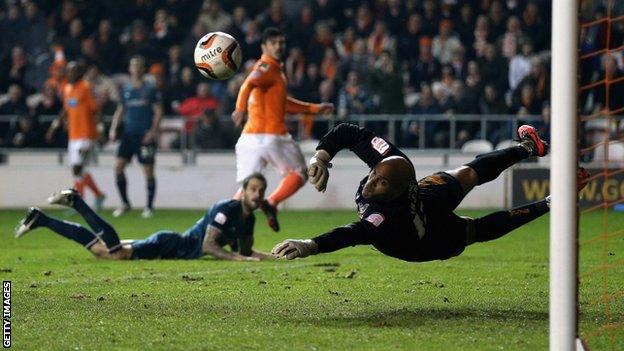 Ebanks-Blake latched on to Jermaine Pennant's pass and dinked over Matt Gilks to give his side an early lead.

Tiago Gomes struck a post and Carl Ikeme pulled off an amazing triple save as Wolves somehow preserved their lead.

Moments before Baptiste's goal, Ebanks-Blake had almost completed his hat-trick when he rounded Gilks but lashed his shot high and wide.

Wolves' third win in four games moved them five places up the league into 13th place, just one point behind the Seasiders, who were previously unbeaten in eight matches since Appleton took over from Ian Holloway.

Wolves had already served notice of their threat with Bakary Sako slicing high and wide before they took the lead in the third minute.

Pennant slid the ball through a gap in the home defence to the onrushing Ebanks-Blake, who clipped expertly past Gilks.

Blackpool enjoyed plenty of possession, but it was half an hour before they fashioned a clear sight of goal.

A long ball put Liverpool target Tom Ince clear of the Wolves defence on the right, but instead of trying his luck, he played the ball across goal and narrowly beyond the outstretched leg of Wes Thomas.

Moments later, Ince shimmied clear of his marker and squared for Gomes, who slammed the ball against the post from 20 yards.

Suddenly Wolves were all at sea, with gaps appearing everywhere in their defence. Ince's shot was saved by Ikeme, but the ball looped to Thomas, who could not keep his header down with the goal gaping.

The one-way traffic continued after the break as Ince was played through once again, only for Stephen Ward to block his goalbound shot.

Then, Ikeme pulled off three saves in two minutes to deny Gomes and Ince twice, the last an athletic lunge across his goal to parry a full-blooded volley from the 20-year-old England Under-21 winger.

The introduction of the combative David Davis prompted Wolves' best spell of the game and they were handed the chance to seal the win when Chris Basham needlessly tugged Sako's shirt inside the box. Ebanks-Blake struck his spot-kick down the middle to double the visitors' advantage.

Blackpool gave themselves hope with a close-range header from captain Baptiste after Nouha Dicko's shot was saved, but in four minutes of injury-time they could not force an equaliser.

Blackpool manager Michael Appleton: "You don't have to be a rocket scientist to weigh up the whole game and look at the opportunities we created in both halves and say we probably should have got something out of the game.

"But it wasn't to be, a poor two or three minutes at the start of the game and we won't talk about the other decision.

"I think he's given it for pulling of the shirt, but if it was a pull of the shirt it was the slightest of pulls and definitely he was outside the box, quite comfortably. It's disappointing."

Wolves manager Stale Solbakken: "Carl Ikeme was brilliant with three or four good saves. The lads should give him a pat on the back.

"Having David Davis come on, we started to get more of a grip on the game again.

"I think Jermaine Pennant played his by far the best he's played in a Wolverhampton shirt in an away game.

"Sylvan Ebanks-Blake has worked hard. He came in training with a great attitude and also in games so I am pleased that he got his goals."