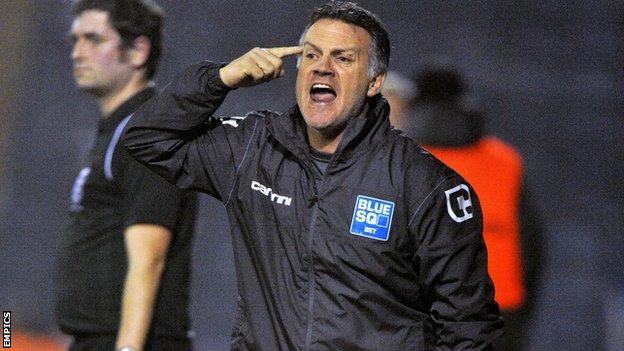 AFC Telford boss Andy Sinton is warning his players not to do an 'Arsenal' ahead of Saturday's FA Trophy second round trip to King's Lynn.

Telford head for Norfolk as favourites against Lynn, who play in Evo-Stik Division One South, two levels below.

But Sinton insists: "It's a tough game. We've had King's Lynn watched so we'll give them the respect they deserve.

"Arsenal started off as favourites against Bradford City this week and we all saw what happened there."

Our mindset has got to be spot on. The players have to be switched on because these games can be difficult

Telford are in the middle of a barren seven-game winless run in the Blue Square Bet Premier, but they interrupted that three weeks ago to see off Nuneaton 1-0.

Now Sinton is very keen to see his side through to the last 16 - and beyond.

"We've got to see it as an opportunity to progress and win this competition," he told BBC Radio Shropshire.

"But they've beaten a couple of higher sides along the way and our mindset has got to be spot on. The players have to be switched on because these games can be difficult."

Sinton has the services of both Jake Reid, who is back from a month's loan at Redditch and Chris Blackburn, whose similar loan spell has ended at Chorley.

"They haven't had as many games as I hoped," said Sinton. "With both players, it would have suited us for them to stay where they were because, in the second month, you get a 24-hour recall.

"Jake wanted to really come back and try and show what he can do. With Chris, Chorley said thanks, but no thanks."