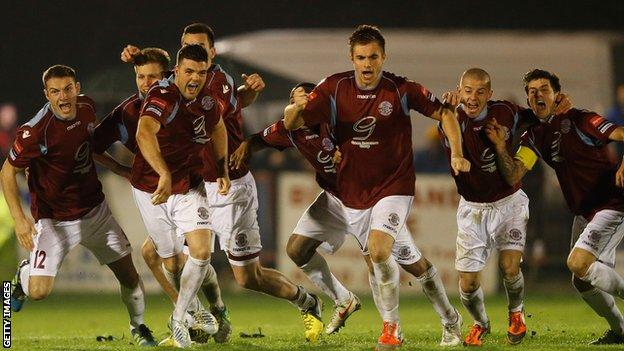 Hastings striker Dee Okojie admits he was nervous in their FA Cup shoot-out.

The 24-year-old, who coaches children in his spare time, hit the winning penalty against Harrogate to set up a third round tie at Middlesbrough.

He told BBC Sussex: "All I was thinking about was hitting the target. I tried to stay as calm as I could even though the crowd was roaring.

"I always tell the kids to relax and let their ability shine through. They would have hammered me if I missed."

The 24-year-old striker added: "Fortunately I hit the back of the net."

The Isthmian Premier League side booked their place in the third round for the first time in the club's history after beating Harrogate Town 5-4 on penalties following a 1-1 draw in their second round replay.

The Arrows are the lowest ranked team still in the competition and will travel to Championship side Middlesbrough on Saturday, 5 January.

Arrows player-manager Sean Ray says he had every faith when Okojie had the chance to win the replay against Harrogate.

"I had great confidence in Dee," Ray said. "The scenes afterwards were unreal.

"The first thing I did was shake their players' hands and spoke to their manager. All our boys ran off into the crowd and before I knew it I was mobbed.

"We got to the second round for the first time in the club's history and now we're in the third round. It will take a while to sink in.

"What the players have achieved is phenomenal and will probably never be achieved again at this football club."

"The adrenaline and effort you put in is tiring. We've got another game on Saturday (away at Thurrock) so we've got to go again."

"I can't put into words how proud I am," Walters told BBC Sussex.

"These boys have been so good since September when we won the first game against Chatham.

"We went 1-0 down against Staines, Bishop's Stortford and Harrogate. It didn't matter.

"These boys are stars. It's unbelievable."