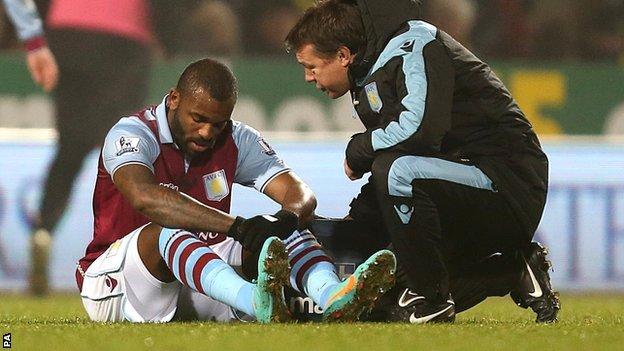 Aston Villa striker Darren Bent has been ruled out for the rest of the year with a hamstring injury.

The 28-year-old limped out of the Capital One Cup quarter-final victory over Norwich at Carrow Road on Tuesday after only half an hour.

It was Bent's first start in six weeks after he was left in the stands despite being passed fit after an ankle injury.

I think a few weeks. Maybe four weeks, I'd say, before we see him back

"Is he out of the Christmas games? Yes, probably, the way it is looking," said Villa boss Paul Lambert.

"He went for a scan on Wednesday and has got a problem with his hamstring.

"I think a few weeks. Maybe four weeks, I'd say, before we see him back."

He returned to fitness but has been on the bench in recent weeks as Lambert preferred to use Christian Benteke and Gabriel Agbonlahor up front.

Benteke, Agbonlahor and Andreas Weimann have shouldered the responsibility for the majority of Villa's goal output this season.

But Lambert said: "You are looking for goals all over the pitch. It's not just about Christian, Andreas and Gabby.

"You have got to spread it out if you can. The way we are playing we are certainly creating chances, which is the pleasing thing.

"You just hope the lads will be confident enough to go and take them."