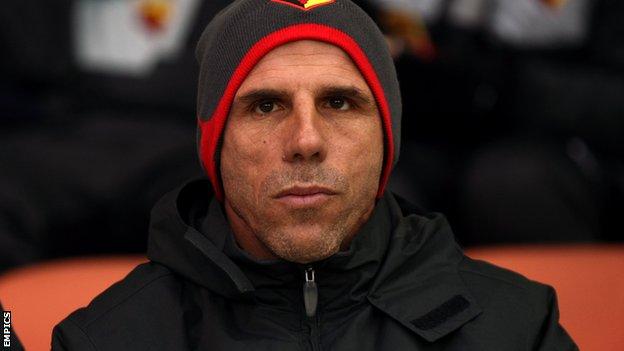 Watford boss Gianfranco Zola has backed the loan imports in his squad to cope with the English winter and keep them in the promotion picture.

The squad has been transformed since Zola took charge, with 16 players coming in, most of them non-British.

"Certainly, the conditions are difficult and it takes a bit of time to adapt to this," the Italian told BBC Three Counties Radio.

"We have intelligent players and they can handle it."

"But the desire to be successful makes everyone stronger and that's what I'm looking for."

Watford travel to face Burnley on Saturday for a meeting with a side managed by former Hornets boss Sean Dyche.

Zola again paid tribute to his predecessor, who guided Watford to an 11th-place finish last season.

"I've always said that I appreciate and recognise that he did a great job last year and I do hope he does a great job for Burnley - after Saturday," he said.

"We know the danger in this game and we need to make sure we can get round the problems they are going to create for us."