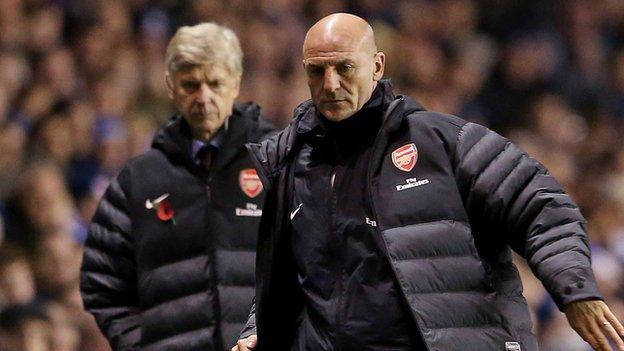 Arsenal manager Arsene Wenger has denied there is a rift between him and his assistant Steve Bould.

"We are a united staff and cannot control lies which are written," the Arsenal manager said.

"When our results are not good we have to take that on the chin. To face a lot of lies is less acceptable."

What is important is what happens tomorrow, not what happened yesterday

Arsenal were beaten on penalties by League Two Bradford in the quarter-finals of the Capital One Cup on Wednesday.

Wenger said: "What is important for us now is the future; how we do in the Premier League, the Champions League and FA Cup, not whether we are out of the Capital One Cup.

"We all look to the future. I believe we have a strong squad and it is up to them to show I am right.

"We are sorry for that (the Bradford loss), but what is important is the next game."

The Frenchman hopes Arsenal will provide the required response when they take on struggling Reading in the Premier League on Monday night.

"I believe it's a good opportunity to show that we are strong inside the club and let people talk," he said.

"We are top professional people. What is important is what happens tomorrow, not what happened yesterday."