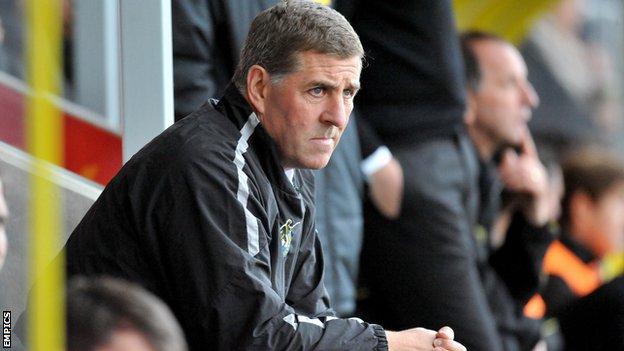 Manager Mark McGhee has admitted he is "embarrassed" Bristol Rovers are in the League Two relegation zone.

The Scotsman's side sit two points off the bottom of the Football League after only four wins from 21 games.

He told BBC Radio Bristol: "I think all the other managers in this league would agree - you don't want to be in the bottom division of your league tier.

Bristol Rovers' lowest Football League finish came in the 2001-02 season, where they ended 23rd - one position above the relegation zone

He continued: "I never imagined in a million years that, at any stage this season, we would be in the relegation zone.

"It's a shock to my system as much as anybody else's."

It is Rovers' second season back in the division and McGhee was brought in at the start of the year to turn their fortunes around following Paul Buckle's unsuccessful seven-month tenure.

When McGhee stepped in they were five points off the drop zone and eventually finished the season in 13th.

They were tipped as promotion candidates at the start of the current campaign but have only picked up 18 points from 21 games.

And as a former second-tier side, McGhee feels the club should question why they have slipped down the divisions.

"From a grander perspective - and I mean this is in the best possible way - there are three leagues above us and in a sense I'm embarrassed Bristol Rovers are in League Two.

"I think Bristol Rovers should be embarrassed to be in the second division.

"I'm going to games - I was at Hereford against Cheltenham during the week - and I'm almost hoping that people don't speak to me, because I feel embarrassed.

"I don't want people patronising me or pitying me - I just want to get us out of this league."