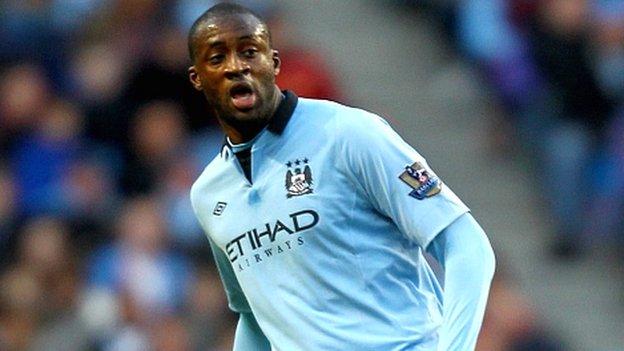 Manchester City manager Roberto Mancini admits midfielder Yaya Toure is likely to be unavailable for five weeks due to his Africa Cup of Nations involvement.

Mancini had hoped the Ivorian would opt out of the tournament but now expects him to leave after City's FA Cup third round tie against Watford on 5 January.

"It is difficult," said the Italian. "I think he will go to the Africa Nations Cup after the Watford game."

The tournament in South Africa runs from 19 January to 10 February.

Toure has been a key figure in the centre of City's midfield since joining from Barcelona for £24m in 2010.

He played in this year's Africa Cup of Nations as Ivory Coast lost the final to Zambia on penalties but managed 32 league appearances as City won the Premier League for the first time, ending a 44-year wait for the top prize in English football.

The champions suffered their first defeat of the season last weekend against Manchester United and are six points behind their local rivals in this year's title race.

It was claimed Mancini had words with Joe Hart and Mario Balotelli in the immediate aftermath of the game, hinting at serious rifts within the camp.

Mancini denied this though, stating he preferred to keep the content of such discussions in-house.

Meanwhile, the City boss also played down talk of nets being required to preserve player safety after Rio Ferdinand was hit by a coin as United celebrated Robin van Persie's injury-time winner at Etihad Stadium.

"Football here is beautiful," said the Italian. "People here are very close to the players.

"I am very sorry for what happened in the derby. I hope it won't happen again. But football is better without nets."