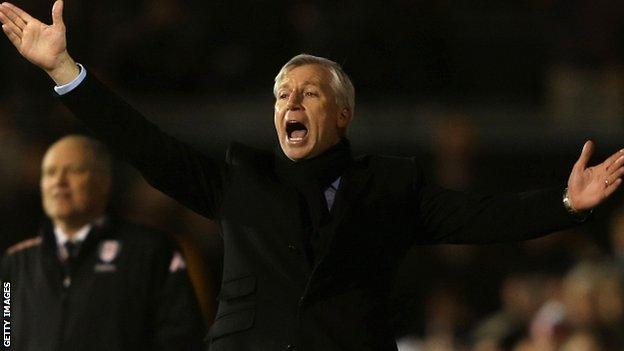 The Magpies are 14th in the Premier League and have won only once in 10 matches since the end of October.

"We are having a tough run, but the work ethic is there," Pardew insisted.

"One big result, which could happen this weekend, could change a lot of the picture and we could find ourselves in a good position in the league."

Newcastle were in contention for a Champions League place after six successive victories in the Premier League last season, but lost their final two matches and eventually finished fifth.

Pardew, who succeeded Chris Hughton at the helm in December 2010, signed an eight-year contract in September but earlier this season his side lost four consecutive league games for the first time since their relegation in 2008 and have yet to win away this term.

Assessing the challenge posed by Roberto Mancini's City, who won the corresponding fixture at St James' Park 2-0 in May, he said: "They were definitely the best away team we played last season.

"We got nothing off them last year but I don't think they are as strong as they were last year coming into this game.

"What I do know is they will be pretty much focussed on this game and therefore it probably makes it a shade more difficult.

"But when you're champions of the Premier League, it's a difficult game full stop."