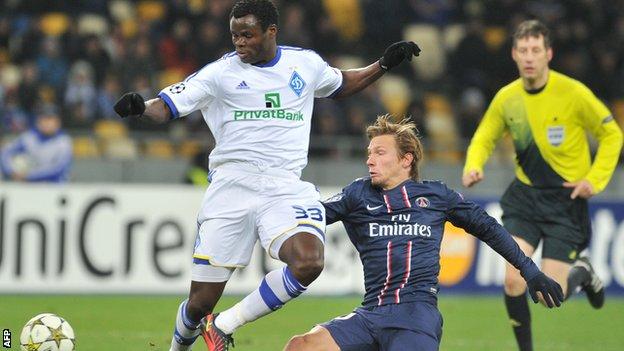 Nigeria defender Taye Taiwo hopes his performances for Ukrainian side Dynamo Kiev will be enough to earn him an international recall.

Frozen out at Italian giants AC Milan, the left back moved to Ukraine on loan in June.

Taiwo won the last of his 59 caps for Nigeria in a 0-0 Nations Cup qualifying draw to Rwanda in February.

He is hoping his improved displays in European competitions will earn an international recall.

"My form was below average after being left out of games in Italy and maybe that's why I was dropped from the national team," Taiwo told BBC Sport.

"But I've recovered my form with my new club in Ukraine and dream of playing in South Africa.

"The selection will be decided by the coach but I hope I have done enough to make the Nations Cup squad."

Nigeria coach, Stephen Keshi, is expected to name his provisional squad for the tournament in the coming days, and appears to have left the door open for the likes of Taiwo.

"I have been following players like [Taye] Taiwo, Sone Aluko, Dickson Etuhu, Victor Anichebe and several others who have not been given a chance," said Keshi.

"There's no sentiment when it comes to selection for Nigeria because we need our best players to represent us.

"He [Taiwo] has a chance like others but must earn it. Has he done enough? That's something I will have to consider when the time comes."

The Super Eagles will play friendly matches against Angola - in Portugal - and Catalonia in the build-up to the Nations Cup.

"I know the locally-based players that will make the final cut and those who are just not ready yet," Keshi said.

"We have a couple of foreign-based players who were not with us but I will look at giving them a chance during the friendlies and see if they can stake a claim."