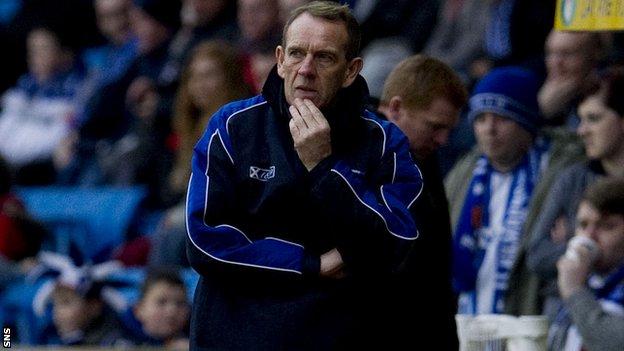 Kilmarnock manager Kenny Shiels is accusing a match official of an "outrageous fabrication" of evidence against him.

Shiels asserts that Andrew Dallas, the fourth official in Killie's league match against St Johnstone, invented a story that led to him being dismissed.

The Kilmarnock boss was sent to the stand after Dallas reported him for misconduct on the touchline.

But a Scottish FA judicial panel chose not to punish Shiels over the incident.

He was found in breach of rule 203 relating to misconduct but the panel ruled no further sanction was necessary.

The Northern Irishman told BBC Scotland that he presented video evidence to back up his case against a charge of "dissent, adopting an aggressive attitude and by the use of offensive, insulting or abusive language".

Shiels insists that he does not want Dallas to be punished but wants him to "do his job properly".

Shiels was ordered out of the dug-out by referee Stevie O'Reilly during the 2-1 home defeat by St Johnstone on 24 November.

This followed an exchange with Dallas after the dismissal of Kilmarnock captain Manuel Pascali early in the match.

"I was totally exonerated, yet I had to sit in the stand for a whole game," was Shiels' view of the panel's decision.

"I brought in evidence to disprove the fourth official, who fabricated stuff to try and incriminate me. I don't like that.

"I'm not going to lie down to these people.

"The fabrication was outrageous - at least four different things that were said about me - but he wasn't aware I had visual evidence on my laptop.

"If I hadn't brought the evidence, I'd have got another four matches [added to a three-game touchline suspension for a separate matter].

"He had to substantiate a really good story to back that up. He tried but he wasn't aware I had evidence on camera."