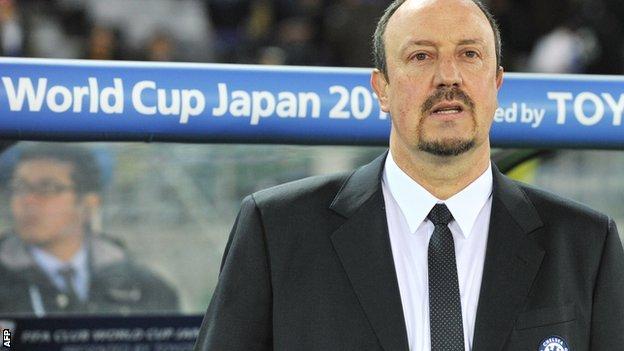 Chelsea manager Rafael Benitez hopes to "maintain the club's winning mentality" with a victory against Corinthians in the Club World Cup final.

"I'm trying to keep our winning mentality and our hunger to win trophies," said Benitez.

"Some people say this tournament is not the biggest in the world but I know it's an important competition."

Benitez will become the first man to manage a side in three Club World Cup finals after guiding Liverpool and Inter Milan to the 2005 and 2010 finals respectively, winning the trophy with the Italians.

"I'm really pleased and really proud because I could manage three top sides in the world," added Benitez.

"To be here and to have this opportunity to win again is amazing and fantastic."

Benitez must decide whether to keep David Luiz in a midfield role or move him back into defence after he impressed in Chelsea's 3-1 semi-final win against Mexican side Monterrey on Thursday.

Midfielder Frank Lampard is pushing for a starting place after coming off the bench in that game, while Spanish striker Fernando Torres will be aiming to continue his revival after scoring five goals in three games.