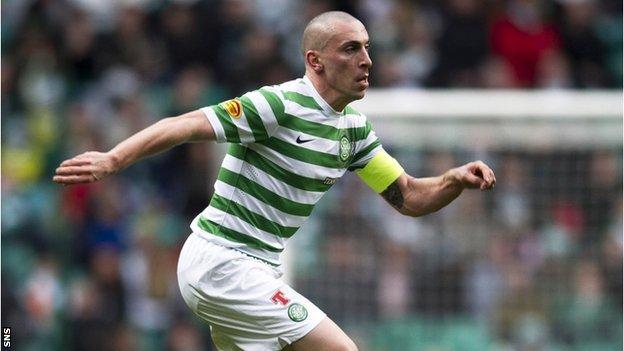 Within a fortnight, Scott Brown has re-emerged as a key part of Celtic's progression on three competitive fronts.

Of the last 360 minutes of Champions League, Scottish Premier League and Scottish Cup football, the Hoops' captain has played 354.

It seems a long time since the 2-1 defeat to Benfica, when we lip-read Brown tell the referee - in no uncertain terms - that his game was up after an hour in the Estadio da Luz.

Yet now, much of the talk centred on a possible hip operation has been drowned out by 'hip-hip hoorays'.

Murdo MacLeod, himself an influential Celtic midfielder during the '70 and '80s, believes he has witnessed a revitalised Brown in recent times.

"It's been a great turnaround," said MacLeod.

"You would take half-a-dozen Scott Browns in your team because you'll always get more from that type of team than a team with all the superstars.

"If every player had the same attitude as him then Celtic would be absolutely flying just now - unbeaten."

All the vital signs of a Scott Brown in normal working order have been evident before each of the kick-offs.

In the tunnel, his steely stare fixed dead ahead, rarely blinking and undistracted by the usual to-ing and fro-ing of teams, officials and mascots.

, Brown initially looked off the pace in the opening minutes, but gradually began to show his worth.

As the clock neared the eight-minute mark, Spartak's be-gloved number six, Rafael, turned Brown all too easily and advanced infield.

However, Rafael hadn't shaken off his opponent yet.

Brown harried the Brazilian to such an extent that not only did he misplace his pass, but he received a late barge to the ground by the Celtic captain in a "don't do that again" type manner.

It was as if, in that moment, Brown remembered his own game.

Soon, he was expertly dispossessing opponents, manoeuvring the ball in tight spaces, linking up forward play and putting in a few shots of his own, too.

"Scott Brown, as everyone knows, gives 100% in every single game he plays in," said MacLeod.

"There are a lot of games you need him in to have a go at his team-mates, to lift them, to get them more focused on the full 90 minutes."

Three days later and an awkward SPL trip to Kilmarnock - the scene of a 3-3 draw last season that Neil Lennon would rather forget.

Would Brown be ready to play his part in ensuring Celtic didn't serve up another European hangover in the league?

It would seem so.

'Broony', as he is affectionately known by fans, was instrumental in

He scored the first, assisted with the second and made a key contribution to the third - not to mention completing the 90 minutes of football.

"He played a big, important role in the Spartak game but I was amazed watching him down at Kilmarnock - the best performance of the season from Brown," said MacLeod.

"The thing that pleased me most was he looked as if he was free in his running style and he was enjoying working hard up and down."

Fast forward another four days and Brown was unleashed to lead his team for another full hour and a half.

This time, in their second attempt at trying to seal a safe passage through to the Scottish Cup fifth round.

Albeit not a scintillating performance by Brown or his team, the midfielder still looked more than competent in dealing with what came his way - and he did throw in the odd touch of flair and imagination as well.

A lively Brown again completed a match which brought the Hoops their first league win at Celtic Park in more than two months.

"He was saying the other day that the more games he plays in, the fitter he's getting," said MacLeod.

"Hopefully he's settled down now and he can go and enjoy his football again."

If 'Broony' can continue to evade this hip problem and keep building momentum, Celtic and Scotland will have themselves a player to cherish.