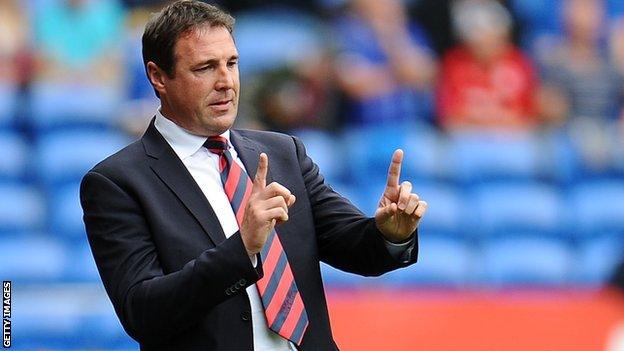 Cardiff City manager Malky Mackay says the leaders will be taking nothing for granted when they face bottom team Peterborough in the Championship.

The Posh are 23 places and 31 points behind the Bluebirds.

But with Cardiff going for an 11th consecutive home win, Mackay says his team are taking nothing for granted.

"The minute you start judging if you're going to win or not by the league table then you can forget it. We're going in with our normal game plan," he said.

"We've had them watched three times recently like we normally do and we have planned an prepared exactly as we always do."

Cardiff City will be captained by midfield star Peter Whittingham in the absence of suspended central defender Mark Hudson.

Apart from Hudson, City are without Tommy Smith who Mackay says is a couple of weeks away from fitness, and long-term absentee Nicky Maynard.

The Bluebirds are three points ahead of second-placed Crystal Palace and six clear of Middlesbrough in third.

Mackay says he doesn't expect Peterborough to be a walkover.

"They're in a situation where they need to win as many games as they can, like us," said Mackay.

"They'll be coming here desperately wanting to win and we'll treat them just the same as we treat anyone else.

"It's a team that are very dangerous that on another day would have beaten Middlesbrough last week.

"And we're at home in front of our fans, and we have to go in and make sure we beat Peterborough."