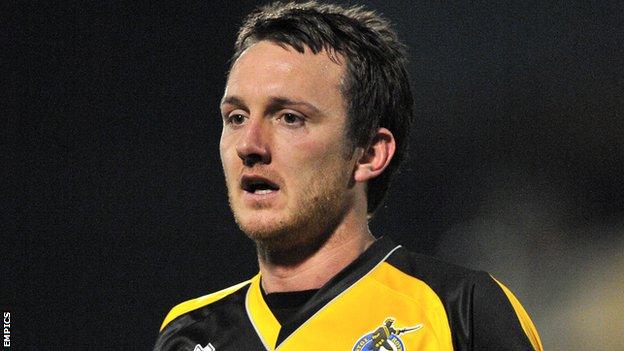 Jose Baxter headed the visitors into an early lead but the Glovers levelled through Gavin Williams's penalty after Jean Yves Mvoto's foul on Ed Upson.

Williams made it 2-1 with a superb 30-yard strike and James Hayter coolly slotted home their third.

Baxter found himself unmarked to put Oldham ahead, but his side never settled into the game and Paul Dickov's men appeared to unravel in a wild second half.

Williams added to his confident spot kick with a spectacular second just before the break, which saw him fire in to the top corner after making a blistering run from the halfway line.

Reece Wabara, who set up the opening goal for the Latics, missed a great opportunity to bring his side back in to the game and, shortly after, Hayter made it 3-1 from Upson's centre.

Simpson pushed his luck with referee Phil Gibbs after a heavy challenge on Stech, which went unpunished, but the forward received a straight red for a similar tackle moments later.

Carlisle loanee Madden added to Oldham's woes by capitalising on a mistake from keeper Dean Bouzanis and side-footing home.

With six of the 10 League One fixtures postponed because of adverse weather conditions, Yeovil moved up from 14th to 11th in the table. while Oldham remain 16th.

"[For the second goal] I picked it up and went on a run. To be honest, I think I just got a bit tired and I thought I'd better hit it.

"Luckily for me it's gone right in the top corner so I was pleased with that.

"I struggled early on in the season but I do feel like I'm getting match-fit now.

"Hopefully I can get a run of games together and then the supporters will see the best of me."