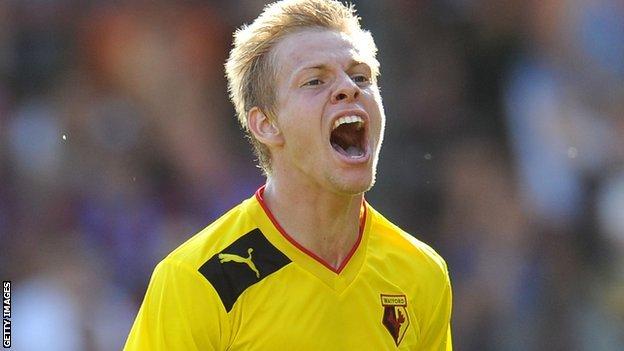 Watford moved into the Championship play-off places thanks to Matej Vydra's double against Nottingham Forest at Vicarage Road.

The Czech gave the hosts the lead from inside the area after Almen Abdi's through ball, and doubled the advantage with a neat 12-yard finish.

By that stage Forest had been reduced to 10 men, Daniel Ayala shown a second yellow card for fouling Troy Deeney.

Vydra's two goals took his tally for the season to 10, sending the Hornets up to sixth as Forest dropped to 11th.

Watford, who have now won five of their last eight matches, took control after the opening goal, but they had to weather an early storm.

Danny Collins almost put the visitors ahead with a glancing header from Andy Reid's free-kick, and Billy Sharp shot wide at the back post following Simon Cox's cross.

However, when Guy Moussi conceded possession in midfield after 15 minutes, Abdi played in Vydra and he made no mistake.

Having avoided a dismissal for a clear foul on Vydra, on-loan Norwich defender Ayala brought down Deeney on the edge of the penalty area and was sent off by referee Neil Swarbrick.

From that point, the result was never in doubt, and Vydra made it 2-0 five minutes before the break.

Guedioura shot into the side netting after the interval and Sharp dragged a shot wide, but Watford never looked like surrendering their advantage.

Watford manager Gianfranco Zola: "The first half was excellent. Some of the things that we saw were really good.

"I cannot say the same for the first 20 minutes of the second half, in which we took the foot from the pedal completely and we allowed them to come back into the game a little bit more.

"That wasn't necessary but I can understand. The team felt like the game was gone so that is something we need to address."

Nottingham Forest manager Sean O'Driscoll: "I thought we were a threat and had the best chance.

"Danny Collins' header should really have scored, a free header inside the six-yard box.

"But they're a fluid team, they cause you problems and they're prepared to take a risk at the back."