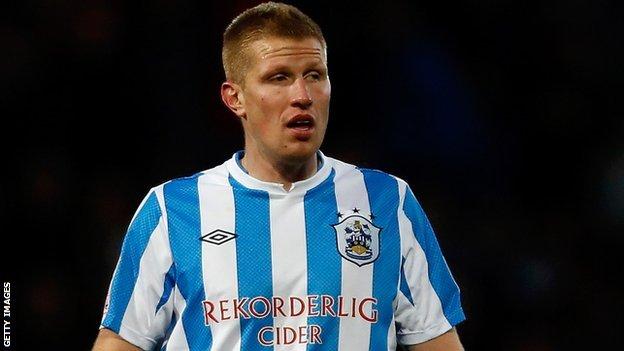 Crystal Palace lost ground on leaders Cardiff as Huddersfield prised a point away from the ten-men Eagles.

Wilfried Zaha's ferocious strike gave the hosts the lead despite their loss of Damien Delaney to a red card for an ugly challenge on Jermaine Beckford.

Adam Clayton had a weak penalty was smothered by Palace's Julian Speroni, but the visitors' pressure told when Keith Southern's shot squirmed in.

Anthony Gerrard was sent off late on as the match finished ten-a-side.

The draw means that Palace are replaced in the top two by in-form Hull City, but for a large part of the match they were on course to keep pace with Cardiff at the top.

Delaney's reckless, knee-high tackle on Beckford put Palace at a numerical disadvantage, and they looked set to slip behind when Eagles old boy Sean Scannell was felled in the area by Joel Ward.

Clayton's spot-kick lacked any conviction, however, and Speroni dropped to his right to keep it out with ease.

The Palace goalkeeper was called upon again soon after, making a better save to keep out Beckford's effort.

Then Palace emerged from under the cosh to take the lead as Yannick Bolasie's cute backheel released Zaha to lash an explosive shot into the roof of the net.

Palace kept Huddersfield at bay for much of the second half but Speroni's previously faultless display was ruined when he allowed Southern's shot to slip through his gloves with 16 minutes left.

Any hopes Huddersfield had of pushing on for a winner were dented though as Gerrard's sliding tackle on Bolasie prompted referee Graham Scott to brandish a second straight red card.

Palace manager Ian Holloway on Delaney's red card: "I thought he [the referee] was so quick to make a decision and I've seen the angle. It wasn't reckless or dangerous play and he wasn't the last man. I just can't believe how quickly, from that angle, that he made that decision. That's a three-match ban.

"If he's going to say that Delaney was the last man and he's brought him down then I could accept that, but for a reckless challenge, not trying to play the ball? I don't agree. But who am I? I'm just the Palace manager. I might be biased, mightn't I?"

Huddersfield manager Simon Grayson: "You're happy to get a point when you come down to Crystal Palace, a team who are flying at this moment in time. But when you look back and reflect on the game, we had some good opportunities. Their 'keeper made some fantastic saves and we had an opportunity to score from the penalty.

"Anthony Gerrard's sending-off? Not from where I was and not from what I've seen on the TV. He didn't jump in and he didn't lead with two feet, so I think he [the referee] has got that decision wrong."