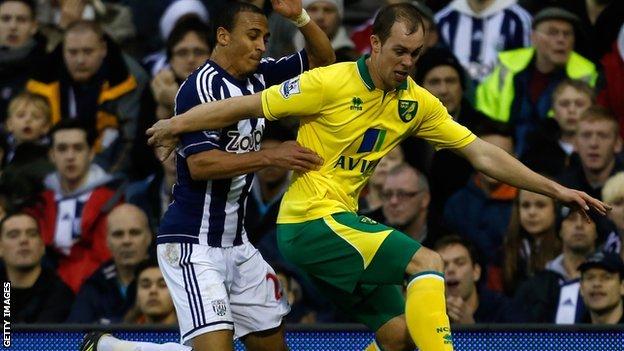 West Brom ended Norwich's unbeaten run with a hard-fought win, which ended six-hours of football without a goal for the home side.

Robert Snodgrass gave Norwich the lead with a free-kick but Zoltan Gera equalised before the break .

Albion had the better of the second half before Romelu Lukaku headed home a Goran Popov cross for the winner.

West Brom saw off a late fightback to end a strong run of form for Norwich, who had been unbeaten in 10 games.

Recent results had seen the two sides heading in opposite directions in the Premier League table.

West Brom's run of one point from a possible 12 pushed them down from a high point of third, while 10 games without defeat had propelled the Canaries to within reach of the European places.

Romelu Lukaku, the last player to score for West Brom when he netted against Swansea more than five hours before Saturday's match kicked off, went close when his glancing header from Popov's cross flew a yard over in only the second minute.

Norwich took the upper hand for a while, patiently keeping the ball, while the home side's tactics were much more straight-forward.

The visitors took the lead at the half's midway point. Robert Snodgrass' free kick from the right curled over the wall towards the top corner, and although Ben Foster got a hand to it he could not prevent the ball from flying in.

The goal stung Albion into action, with Gareth McAuley throwing himself at a corner only to see Bunn make a save with his right foot just in front of the line, while Popov hit a fierce shot just over the bar.

Jonas Olsson's header from a Chris Brunt corner bounced up onto the bar thanks to the slightest of touches from Bunn, but Gera was alert enough to volley the rebound home from close range.

Following the busy end to the first half, the second lacked urgency by comparison, with neither goalkeeper seriously troubled.

Peter Odemwingie stepped up for a free kick from around the same spot that Snodgrass had scored from, but his low effort, drilled straight into the wall, typified a period where neither side could threaten the opposing keeper.

Norwich keeper Mark Bunn went forward for a corner deep into stoppage time to no avail, and Albion held firm to earn three points for the first time since their visit to Sunderland in late November.

In this league, the longer you go without a win it can start to become a problem, so we wanted to put that one away before Christmas.

Going with four up front gave Norwich a different problem, we had four forwards buzzing around, stopping them from playing like they had in the first half.

Boaz Myhill has been exceptional for us, he has done really well but Ben's the number one goalkeeper. He's had his injury problems, he's worked hard in rehab and I just decided today was the day to put him back in.

It was always going to be tough, with the form they have showed. I thought we gave a good account of ourselves, their opportunities were limited but I'm very disappointed with the goal we conceded at a bad time before half time.

There was a challenge on Mark Bunn, but I'll have to have another look at that one. We should have reacted a little bit better once it came off the crossbar, it was a poor goal for us to concede, particularly at that time.

On the balance of play I thought we played some good football but without creating the chances we would have liked.