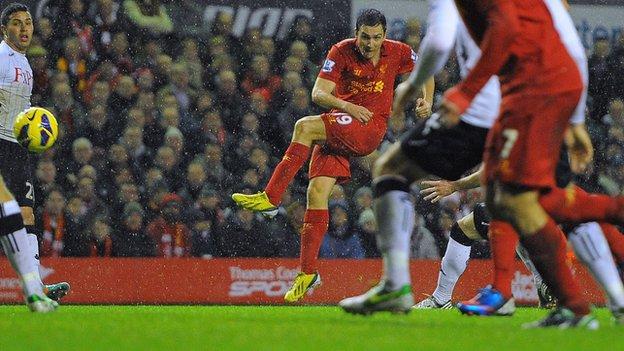 Liverpool's Stewart Downing put in an impressive display as the Reds overwhelmed a tame Fulham to move up to eighth in the Premier League.

Martin Skrtel controlled a Steven Gerrard corner and powered in a shot to put the home side in front.

Downing's piercing ball then set up Gerrard to drive in Liverpool's second.

Winger Downing cut inside and rifled in a shot for his first Premier League goal for the Reds, before Luis Suarez side-footed in to seal an emphatic win.

Downing claims he has been told he can leave Liverpool, but his lively display against the Cottagers suggests he wants to stay and fight for his place.

The 28-year-old helped raise Liverpool's hopes of reasserting a challenge for a top-four place as the Anfield club moved five points off the Champions League places.

Fulham had problems in midfield with Steve Sidwell, Bryan Ruiz and Mahamadou Diarra missing, but manager Martin Jol will be concerned at the meek surrender of a side which has one win in 10 top-flight outings.

Liverpool boss Brendan Rodgers said his team were determined to put right the wrongs of last week's 3-1 home defeat by Aston Villa and the Reds quickly showed the pace, movement and intensity to echo their manager's words on the pitch.

"A deserved win for Liverpool. From the opening whistle to the final one, they were far and away the better side. Steven Gerrard was in exquisite form and Stewart Downing was excellent. A miserable evening for Fulham."

Fulham had not learnt from those scares and the home side took the lead when defender Skrtel was allowed the time and space to control Gerrard's corner before thundering in a shot.

The early goal only served to increase the appetite and the Reds should have added another goal only for a lunging Agger to sidefoot over from close range after a low Suarez cross.

Fulham midfielder Kieran Richardson's swerving shot almost caught Pepe Reina out before he saved the effort with his legs but the visitors fell further behind after 36 minutes.

The much-maligned Downing provided his first assist in 45 Premier League appearances for the Reds when he slid a precise ball through the heart of the Cottagers' defence to Gerrard, who angled a shot past keeper Mark Schwarzer.

A deflected Downing cross set up Suarez for a gilt-edged chance at the far post shortly after the interval but the Uruguayan sent his six-yard shot wide.

Downing was playing in a preferred right-wing berth as opposed to the left-back spot he has sometimes had to fill and took it upon himself to add Liverpool's third as he cut inside before drilling a left-footed shot past Schwarzer.

Fulham were hugely outplayed and it was one-way traffic as Liverpool constantly threatened more goals.

Suarez bustled his was through the Cottagers' defence only to be foiled by a smothering Schwarzer save and the striker also had a well-struck free-kick tipped around the post by the 'keeper.

Reina saved a Hugo Rodallega free-kick before Suarez rounded off his side's win by converting a Jose Enrique cut-back for his 11th league goal of the season.

Fulham manager Martin Jol: "Of course you will say that Liverpool were great today, but they weren't.

"I don't think that we played well. It is disappointing, the second half was a bit better, Karim Frei showed some spirit, but it was bad defending on the third goal as we backed off.

"On the fourth goal from the corner kick it was almost too easy.

"Our intentions were to play the ball to the front three and get Berbatov into the game and support from midfield - we didn't do it."