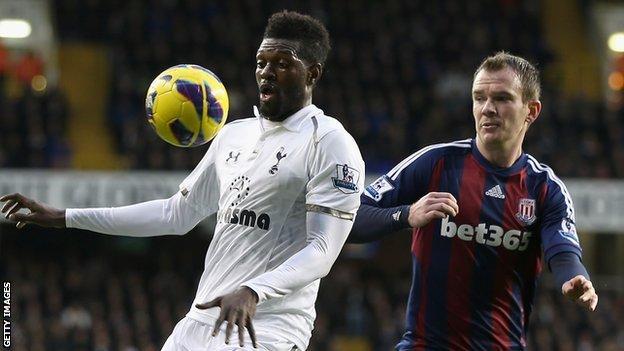 Tottenham missed the chance to go third in the Premier League as they were held to a goalless draw by stubborn Stoke at White Hart Lane.

In a game of few chances Gareth Bale headed over from six yards and Gylfi Sigurdsson's late header was saved.

The 0-0 draw is the Potters' fifth of the season, the most in Europe.

Tony Pulis's side have aspirations of qualifying for Europe and, on this evidence, that is an entirely realistic ambition.

Their downfall this season has been their away form - one win from nine games before the trip to White Hart Lane does not compare to their excellent home record - but they are difficult opponents regardless of the venue.

Indeed, they have now lost only three of their 18 league fixtures this season and possess one of the most miserly defences in Europe, a quality that was on show in north London.

While Stoke are an established, well-drilled unit, Tottenham still appear a team trying to find their rhythm under boss Andre Villas-Boas, although they grew into the match after a sluggish start.

Buoyed by the return of influential winger Bale to the starting XI after a hamstring injury, Spurs might have been expected to begin on the front foot, but they were almost behind following a defensive blunder from Walker.

The England full-back tried a needlessly ambitious pass across the face of his own penalty area inside the first minute but succeeded only in finding Jones, who blazed over from the edge of the box.

Perhaps Spurs' lethargy was to be expected, since only five of the 24 goals scored at home this season have come in the first 45 minutes of matches.

True to form, they showed greater urgency in the second period.

Jermain Defoe shot over from 25 yards a minute after the break before Bale failed to capitalise on his side's best opening of the first hour. After swapping flanks with Aaron Lennon, the England winger crossed from the left and Bale, arriving late at the back post, headed over from close range.

Defoe's partnership with Emmanuel Adebayor remains a work in progress but there were plenty of signs to suggest it can flourish, Defoe repeatedly finding space afforded him by his fellow striker's movement.

Spurs, though, could not find the breakthrough and drop to fifth in the table, as ninth-placed Stoke showed why they might be among the challengers for a European place come the end of the season.

Tottenham manager Andre Villas-Boas: "It is difficult to break them down. We tried everything from the first minute but Stoke proved why they are on a magnificent unbeaten run.

"We had lots of possession and lots of shots from outside the box, but we can't be negative because we gave it a go. We tried to get the three points but we couldn't do it today."

Stoke manager Tony Pulis: "Tottenham are a very good side with outstanding individuals who can win a game in a second, but I thought we played really well in the first half and we had our chances.

"We're pleased that we limited them, with most of their chances coming from outside the box. Tottenham are on a different level to us really when you look at what they've got, but if you work hard you've always got a chance."