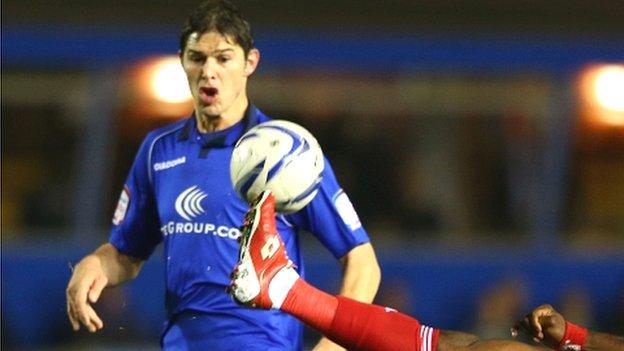 Nikola Zigic's 89th-minute equaliser salvaged a point for a youthful Birmingham in their Championship match against Burnley at St Andrew's.

The hosts went ahead when Curtis Davies headed home a Robert Hall free-kick.

Burnley's Charlie Austin saw a header disallowed, but they were level when Danny Ings took a superb touch and fired home from close range.

Ross Wallace converted a stunning free-kick to put the visitors ahead, only for Zigic to strike from 12 yards.

It ensured a point apiece for two struggling sides, who have now won just one of their last eight games respectively.

His side's inexperience, especially in the full-back positions, showed in the early stages as Ings and Chris McCann both threatened before Martin Paterson was denied by goalkeeper Jack Butland.

But Birmingham got a grip on proceedings and took the lead, Hall crossing for defender Davies to nod in after a foul by Joseph Mills on the right.

Michael Duff might have levelled but fired over the bar from close range after Butland parried Dean Marney's header.

Austin had the ball in the net when he converted Kieran Trippier's cross, but play had been halted for a late foul on Trippier.

However, Burnley deservedly equalised through Ings and, straight from the kick-off, Davies conceded a free-kick on the edge of the area that Wallace scored from to make it 2-1.

But Birmingham pushed late on and their reward came through Zigic.

Birmingham manager Lee Clark: "We deserved the draw, with the youngsters putting up a spirited performance. That was our best first half at home for many games. There were a couple of situations Burnley had in the early part of the game, but we dealt with that and we deservedly took the lead.

"Then there was a mad couple of minutes in the second half when Burnley scored twice. They had a spell for 25 minutes but we switched from doing the basic things. To give away the ball from the restart gave them an opportunity. We were fully aware that Ross Wallace has a terrific delivery and I don't think many goalkeepers would have stopped that free-kick."

Burnley manager Sean Dyche: "It is the madness of football. I told the lads that we are overdue a win. We need the rub of the green. In this match it went Birmingham's way. We have only lost one in six games but we have had four draws.

"We have to challenge to turn those performances into wins. I thought the lads deserved a win because it was a thorough performance. The style of play and the way they delivered it was excellent."