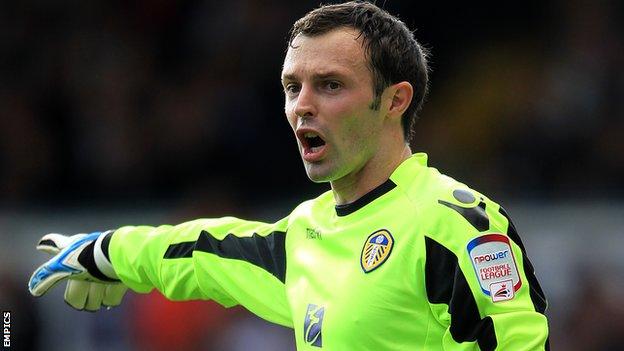 Rachubka stopped Warren Feeney's spot-kick on 78 minutes but was sent off 10 minutes later for retaliating to a tackle from the striker.

Argyle took the lead when Robbie Williams's free-kick crashed against a post and fell to Onismor Bhasera, who slotted home.

James Beattie levelled the score in the second half with a powerful low shot.

Goalkeeper Rene Gilmartin made two important saves as Stanley piled on the pressure.

Then came the penalty, awarded for Michael Liddle's challenge on substitute Paris Cowan-Hall. which Rachubka saved with his legs.

Gilmartin made another spectacular save from Luke Joyce's free-kick, before the late brawl which saw Leeds loanee Rachubka dismissed.

"We didn't play well today, but it was a great point for us away from home.

"The lads just rolled their sleeves up and dug in for one another.

"I'm disappointed we didn't hang on to all three points but credit to Accrington, they came at us and put us under a lot of pressure. It shows a lot of character from the lads to grind out a result and get positives from it, even when we're not at our best. We'll take a lot from that."