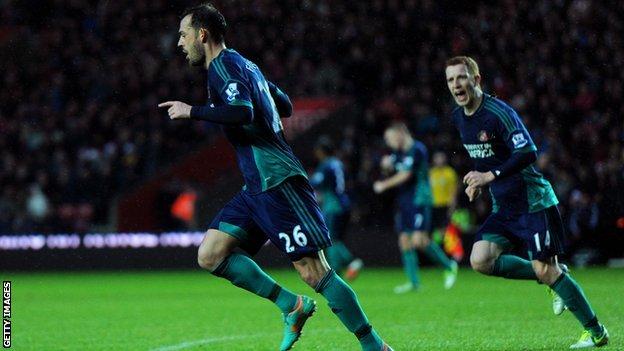 The Saints began well but a Rickie Lambert set-piece was as close as they got before Fletcher steered in a mishit effort from Stephane Sessegnon.

The goal took the wind out of the hosts and Jose Fonte's forceful header was a rare second-half threat to Sunderland.

The visitors coasted home as a comeback failed to materialise.

Sunderland's rich run of form in the early days of Martin O'Neill's reign, just over a year ago, has felt far more distant for the Wearsiders this season.

Sunderland's woe on the road

Sunderland last won away in the Premier League on their visit to Fulham on 18 November. Before that their last victory on the road was a 1-0 win at Stoke's Britannia Stadium on 4 February.

But this victory, combined with seven points from matches over Wigan, Reading and QPR, should reassure fans that they have enough quality to stay clear of the relegation zone.

Southampton have finishing in at least 17th place as their top priority in their first season back in the top flight and have looked far more likely to obtain it recently.

After one win in their opening 11 games, Southampton manager Nigel Adkins has managed to stem the flow of sloppy goals at one end without sacrificing the attractive attacking intent at the other.

The hosts' confidence was obvious in the opening stages.

Maya Yoshida and skipper Fonte ushered an apparently struggling Fletcher down cul-de-sacs, while Gaston Ramirez's neat touches filled the absence of regular captain Adam Lallana in attack for the hosts.

But for all their pretty approach play, Southampton could not manoeuvre their way into a clear sight at goal.

Ramirez's dipping long-range effort was comfortably dealt with by goalkeeper Simon Mignolet and Lambert fizzed a free-kick a foot wide, before Fletcher's predatory instincts sniffed out the opener against the run of play.

The Scot, substituted at half-time in recent matches against Manchester United and Norwich, had appeared to be hampered by a back injury, but was alert to turn in Sessegnon's shanked shot after Adam Johnson had found space down the left flank.

Steven Fletcher has scored the first goal in six Premier League matches - more than any other player.

Emmanuel Mayuka, on an industrious full debut for Southampton, had his appeals for a penalty turned down soon after as referee Howard Webb ruled that Carlos Cueller's rugged challenge had taken the ball.

But Southampton look deflated to find themselves behind and Craig Gardner's teasing delivery deserved a decisive touch from either Fletcher or Sessegnon as the hosts struggled to rouse themselves after the break.

The introduction of Steve de Ridder injected some life into the home side and Fonte's header was cleared by Jack Colback before Jason Puncheon almost wriggled into a dangerous position on the byeline.

But it was not until the last few minutes that Southampton managed to force the Black Cats back into their own penalty area.

Goalkeeper Kelvin Davis came up for a corner but the ball would not settle for Guly Do Prado in front of goal as time ran out and Sunderland clinched only their second win in 17 Premier League away games.

Southampton manager Nigel Adkins: "Today seemed to be a game that was uncharacteristically flat. We gave Sunderland something that they could hang on to and they did that very well.

"We moved the ball about very well, but we did not get the breakthrough and the Sunderland goal changed the complexion of the game.

"The players have put the effort in but it was not to be. We have to put this one to bed and get ready for Fulham."

Adkins' added that captain Adam Lallana would not recover from a knee injury in time to play against Fulham on 26 December.

Sunderland manager Martin O'Neill: "It was a big performance from us today, and I am thrilled not only for the team but also the fans who have travelled down today.

"It is a long long time since they had something to shout about. We had to make a few changes we reverted to a back four that have played in recent times and I thought they were terrific.

"Steven Fletcher has scored a lot of us and all of them have been important, there have not been any third goals in three-goal wins. He has been fantastic and at times I think we are struggling to keep up with him."