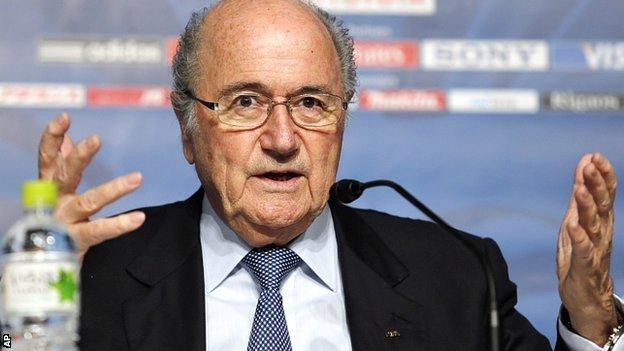 Fifa president Sepp Blatter says he plans to discuss the punishment handed to the Serbian FA with his Uefa counterpart Michel Platini.

The Serbian FA was fined 80,000 euros (£65,000) following violence and racist abuse during Serbia's under-21 game against England in October.

"I will take up the discussion with the president of Uefa," said Blatter, talking at a news conference in Tokyo.

"But I don't know if he has influence on his disciplinary committee."

Platini is reported to be considering an appeal to the disciplinary committee of his own confederation over the severity of the punishment, which also decreed Serbia must play their next competitive under-21 game behind closed doors.

Observers have drawn a negative contrast with the 100,000 euros (£80,000) fine Denmark's Nicklas Bendtner received after revealing a sponsor's logo on his underwear during a Euro 2012 game.

Blatter declined to answer BBC Sport's question as to whether he believed Uefa's fine was too lenient but added: "I'm sure that we can pick up with Uefa [about] the level of governance that there should be in all football - not just with Uefa but all other confederations and national associations.

"There should be very strong, harsh punishment when it comes to discrimination and racism."

The Football Association has strongly condemned the level of the punishment stating it "does not believe the sanction sends a strong enough message".

Elaborating on his belief that Fifa has set a strong example when confronted with cases of racism Blatter said: "Racism and discrimination comes not from football, it comes from our society.

England's Thomas Ince and Steven Caulker were banned over incidents that took place during England Under-21s' win in October.

Four Serbian players were banned, while two of their coaches are suspended for two years.

Uefa will send both football associations its full written reasons for its decision and they will then have three days to decide whether to appeal.